Your Past Is Not Your Future

This is going to be another book review post but this time we’re talking about The Words Between Us by Erin Bartels. I find it interesting that the two most recent books I got from Revell had such similar themes: your past is not your future. I believe the Holy Spirit is trying to teach me–us–something, so let’s talk about it.

How do you know if an event in your past is becoming a defining factor in your life? Someone with a degree in psychology would probably tell you that the answer will be evident in the choices you make, and they’d be right. But there’s an easier way to tell. It starts with conversations, specifically those conversations you find yourself having repeatedly.

What do you talk about most often? What thing from your past gets brought up and discussed at length over and over again? What’s the one thing you would change if you could? Chances are, that’s the thing you’re allowing to define your present and any future you can hope to accomplish.

What do you talk about most often? What's the one thing you would change if you could? It may be impacting your future. #hebrews12endurance Click To Tweet

For me, it’s the fact that I never completed a bachelor’s degree program. I have known for a number of years that I wanted to be a writer but I also know that writing doesn’t always pay the bills and the chances of becoming a successful, well-paid author were slim to none.

For a brief period in my life, I was content to settle. I had stuffed the writing dream so far back in the “never-going-to-happen” closet that I was content to read for any old degree and get on with my life. But when I wanted to go to university, the opportunity wasn’t available and so off to work I went–to a world that defined you by the degree you did or did not have.

Fast-forward more than a decade and I’m still having that conversation on repeat: what would my life be like now if I’d made different choices? Would I be in a different place if I’d gone to university?

The Words Between Us Review

The Words Between Us blends the past and the future into a seamless blend so that it’s sometimes difficult to separate the two. We quickly realize that Robin is unable to enjoy the present because she is so firmly entrenched in the past. In that way, she’s just like us.

Know God: There was only a very faint thread of Christianity in this book and it was in a secondary character, Dawt Ti. Robin–who was the highlight of the book–admitted to only going to church on special occasions. She didn’t seem to believe in God and it showed.

Where Christians have the comfort of Romans 8:28 (even if we can’t quite believe how it could be true), Robin had nothing.

She reminds us that if the only thing we can put our faith in is people, we are bound to be disappointed because people are imperfect and they make mistakes.

Know yourself: Robin defined herself by the mistakes her parents had made in the past. She built walls around herself because she was afraid to let anyone in. She couldn’t see that the mistakes of her parents’ past did not have to define her future.

Instead, she tried to distance herself from everything connected with them and lost herself in the process.

Run your race: We can’t live someone else’s life, we can only live our own. Robin spent so much time blaming her parents for their actions she never took the chance to figure out what her life could be like without them.

The Words Between Us is a tale about the impact of the written words. Authors can sometimes feel as if the words they write don’t matter–especially if they are receiving the exposure they expected or desired. But they do.

Our words are an opportunity to show others they are not alone–the thing they’re going through (which feels hard and painful)  is not unique to them. Others have experienced it and survived.

Even if you never write a single word, your words matter so choose them wisely. Because you have the chance to impact someone’s life either positively or negatively.

Your words matter so choose them wisely. Because you have the chance to impact someone's life either positively or negatively. #wordsmatter #hebrews12endurance #thewordsbetweenus Click To Tweet

The Words Between Us: Your Past Is Not Your Future

There’s a lesson for us in The Words Between Us. Like Robin, we can get wrapped up in the past. We can live there in memories and words. We can allow it to seep into our present until it leeches all the color out.

I’m not telling you to forget the past–don’t disregard the hard things you’ve experienced because they were hard. But don’t forget the lessons either.

The enemy wants you to be so focused on the bad things which happened in your past that you are unable to move on. But my friend, you are not your past and your past is not your future. God has given you everything you need to turn those horrible memories into a testimony.

Look, I know it’s hard. I know you’d rather replay your bad memories or bury them in the deepest part of your mind, but that’s not what God wants.

We can get wrapped up in the past. We can live there in memories and words. We can allow it to seep into our present until it leeches all the color out. #bepresent #hebrews12endurance Click To Tweet

Bad things happen because of sin, but God wants us to know He is always there for us. He did not leave us when the bad thing was happening and He won’t leave us now.

While our past experiences shape who we are, they are not the defining factor. We have the choice to use our past to create a brighter future than maybe our past indicates. But we can only do that through Christ.

I received a copy of The Words Between Us as part of the Revell Reads Blogger program; a positive review was not required.

About The Words Between Us

Robin Windsor spent most of her life under an assumed name because her parents had made some bad decisions which messed her life up. But for one summer, she had a moment of peace when she met Peter Flynt. The two share a love of books and the words fly between them.

But because life–and books–aren’t fair, Robin’s perfect summer is ruined by a ginormous even and she spends the rest of her life running from her parents’ mistakes and the impact they had on her life

She finds sanctuary in her rather unremarkable used bookstore just up the street from the marina in River City, Michigan. But the store is struggling and the past will not stay in the past.

She receives an eerily familiar book in the mail on the morning of her father’s scheduled execution and is thrown back to the long-lost summer she met Peter Flynt, the perfect boy who ruined everything. 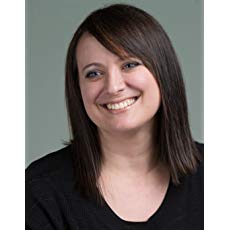 Erin Bartels is the author of We Hope For Better Things and The Words Between Us. She lives in the beautiful, water-defined state of Michigan where she is never more than a ninety-minute drive from one of the Great Lakes or six miles from an inland lake, river, or stream.

She grew up in the Bay City area waiting for freighters and sailboats at drawbridges and watching the best 4th of July fireworks displays in the nation. She spent her college and young married years in Grand Rapids feeling decidedly not-Dutch.

She currently lives with her husband and son in Lansing, nestled somewhere between angry protesters on the Capitol lawn and couch-burning frat boys at Michigan State University. And yet, she claims it is really quite peaceful.