When the Church Hurts You

We like to think that when we choose to become a member of God’s body that everything will be perfect. We will be fed by pastors who teach us the Word and will be surrounded by members who love God and are exhibiting the same care and fervor towards each other as did the early church. And sometimes we get that. But sometimes we don’t. What do you do when the church hurts you?

What Is Church Hurt?

Now if you’ve never been hurt by the church, you may be wondering “What Is Church Hurt?” Basically, it’s what happens when an individual experiences any form of emotional distress by members of the church or in response to a policy of the church. It may be a case an over-zealous member says or does something that hurts someone else.

What Is Church Hurt? Basically, it's what happens when an individual experiences any form of emotional distress by members of the church or in response to a policy of the church. #hebrews12endurance #churchhurt Click To Tweet

Sometimes it’s done by persons who are passionate about defending the faith. You know the type of person I mean–Sister So-and-So who is a stickler for rules and makes it a point of her duty to walk around with a tape measure on Sabbath mornings because she will not allow anyone whose hem is more than two inches above her knee to go on the platform.

But a lot of the times, church hurt happens because broken people come in contact with more broken people. People in the body of Christ have not yet mastered the art of acting like their Savior.

When Church Leadership Hurts You

When your church hurts you it’s easy to forget that it is filled with people who are struggling with sin–just as you are. For some reason, we hope to find a perfect church, filled with perfect people. We think we’re going to have leaders like Paul, Peter, and James but instead we have people who speak out of turn and don’t always say the right words.

We read the Bible and think the early church was a perfect place to be. We think Paul was the epitome of a perfect leader. We forget that they were imperfect people too.

We read the Bible and think the early church was a perfect place to be. We think Paul was the epitome of a perfect leader. We forget that they were imperfect people too. #hebrews12endurance.com #Godtransforms Click To Tweet

For years Paul refused to speak to John Mark because he had deserted them in Pamphylia (Acts 15:36-41).

Some time later Paul said to Barnabas, “Let us go back and visit the believers in all the towns where we preached the word of the Lord and see how they are doing.” Barnabas wanted to take John, also called Mark, with them, but Paul did not think it wise to take him, because he had deserted them in Pamphylia and had not continued with them in the work. They had such a sharp disagreement that they parted company. Barnabas took Mark and sailed for Cyprus, but Paul chose Silas and left, commended by the believers to the grace of the Lord. He went through Syria and Cilicia, strengthening the churches (Acts 15:36-41 NIV).

I can only imagine how Mark and Barnabas felt when this disagreement happened. They would both have been hurt by the words of Paul who had already begun to distinguish himself as a leader in the early church. They could have walked away from the ministry, but thank God they didn’t!

They kept working to spread the gospel of Christ to new countries until even Paul came to realize that Mark was a good addition to the body of Christ:

Only Luke is with me. Get Mark and bring him with you, because he is helpful to me in my ministry (2 Timothy 4:11 NIV).

What to Do When the Church Hurts You

When the church hurts you, it is time to hold on even though you want to walk away. #hebrews12endurance #whenthechurchhurts Click To Tweet

Nobody likes to be hurt. And we especially don’t like to be hurt by people we believe should know better or who we care about. But we have to remember that we’re all sinners (Romans 3:23). There’s not a single person who can truthfully claim to be perfect.

And that’s how we learn to deal with church hurt. We acknowledge that the person who hurt you may be hurting as well. They may have suffered as you did, and like you, they need the grace of God to survive their next moment. Our job is to love them, God’s job is to transform their lives.

One of the characters in Christmas on Breakers Point–Joanie–had been hurt by the church. She had seen Christians repeatedly act contrary to the character of God and it broke her heart. It broke her faith and caused her to walk away–turning her back on the church, her faith, and God.

Christmas on Breakers Point asked some hard questions: how can people who claim to love Jesus treat people the way we do? Is it more important to save the people of the world or to be saved?

And then the book pointed us to introspection: are we driving others away because we choose to stick to ideals rather than demonstrate our love for people.

Church hurt is a real thing. There are many people who disassociate themselves with God, the church,  and Christians because people who claim to love God choose to do horrible things. But do we walk away from the church or do we lean into the body of Christ and see if we can learn the lesson God has been trying to teach His people since the beginning of the world? 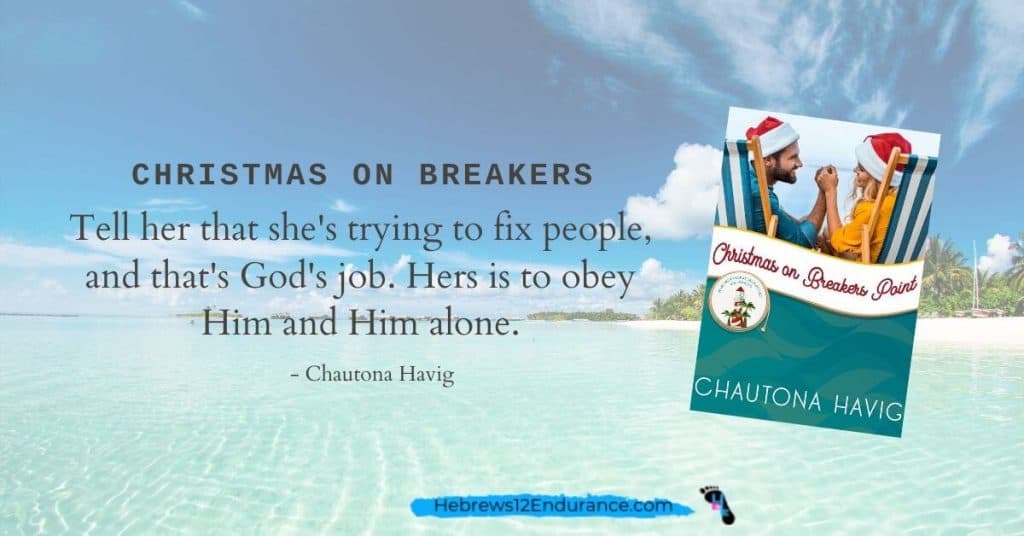 Know God–There were a lot of truths to ponder and believers will be forced to see themselves through Joanie’s eyes. The message is there that we should seek to know God through the study of his Word. And then we should display it through our character.

Know yourself–Both Joanie and Mallory learned more about themselves through their interaction with each other. Joanie had the added task of having to learn how to filter what she knew about herself through her knowledge of and relationship with God. When we know who we are, it affects our life’s work and how we treat the people we meet.

Run your race–As much as Mallory wanted her uncle to stay with her, she realized that he had the right to make his own decisions related to his care. She also had to realize that she had to make her own choices and to continue in the vein of those choices.

Christmas at Breakers Point will give you some interesting points to ponder. You will think about your identity as a Christian and what it means to be a follower of Christ. I received an advanced eARC from Celebrate Lit; a positive review was not required.

About Christmas on Breakers Point

Mallory Barrows has one last Christmas with her uncle. She’s determined to make it the best one he’s ever had. She knows when she asks what he wants as his final gift, it won’t be a tie or a new mug. He won’t need those where he’s going, and he’s quite happy about that.

Mallory just didn’t think he wanted a miracle wrapped in paper and tied with a shiny red bow!

Christmas on Breakers Point is the introductory book to the Independence Islands Series.

Chautona Havig lives in an oxymoron, escapes into imaginary worlds that look startlingly similar to ours and writes the stories that emerge. An irrepressible optimist, Chautona sees everything through a kaleidoscope of It’s a Wonderful Life sprinkled with fairy tales.

Find her on the web and say howdy—if you can remember how to spell her name.

4 thoughts on “When the Church Hurts You”