When the righteous cry for help, the Lord hears and delivers them out of all their troubles. Psalm 37:17 ESV

It’s an established fact that at some point in your life you’re going to feel as though there’s trouble on every side. When King David had to run away from his son, Absalom, he was surrounded, quite literally by his enemies.

David had been experiencing a rough couple of years, emotionally.  About seven years earlier, his son Amnon had raped his daughter Tamar and disgraced her by refusing to marry her (2 Samuel 13:1-21).

Absalom, Tamar’s brother, had bidden his time for two years before murdering Amnon (2 Samuel 13:23-33). To avoid punishment, Absalom had fled to Geshur to live with his grandfather, Talmai. Absalom remained in Geshur for three years (2 Samuel 13:34-39).

Eventually, David allowed Absalom to return to Jerusalem with the condition that he wouldn’t see his face (2 Samuel 14:1-24). After two years, Absalom had had enough and forced a meeting with Joab the king’s right-hand man. Joab arranged a meeting between the king and Absalom.

King David forgave his son and was reconciled with him (2 Samuel 14:25-33). But for whatever reason, Absalom chose to betray his father after they had been reconciled.

He began a systematic campaign to undermine the leadership of King David with the hopes of seizing power for himself. Absalom made a bid for the throne and once again, David was running for his life (2 Samuel 15:1-37).

I can only imagine how David felt at this time of his life. His own son had risen up against him. People who he had thought were his friends chose Absalom over him. Once again, he was running from an enemy, hiding, and trying to survive. He had gone through something similar with Saul, but this time, he was older.

Depression and despair may have nipped at his heels but David knew he could call on God. We don’t know at what point in his struggle against Absalom that he wrote Psalm 3, but it stands as a testimony for us.

David knew there were many who wanted to see him fail and others who believed that God would not help him. But David knew otherwise. He called on God and the Lord heard and responded to his plea. God gave David victory over his enemies and restored him as king of Israel.

My friend, I don’t know what kind of troubles surround you today, but I want to remind you that when there’s trouble on every side, salvation belongs to the Lord (Psalm 3:8).

God is able to save you from your worst enemies. He’s able to give you peace even in the midst of your struggles. He’s able to restore what had been taken from you. He’s able to use what the enemy intended to destroy you as a character and faith-building opportunity. God wants to help you, my friend, won’t you let Him?

El Shaddai, there’s trouble on every side. My enemies have enclosed me and I’m afraid. They want to steal my peace and my joy. They threaten my very salvation but salvation belongs to You, O Lord. Help me in this time of trouble. Hide me under the shadow of Your wings, Lord. Save me from my enemies and grant me victory over them. In Jesus’s name, I pray, Amen. 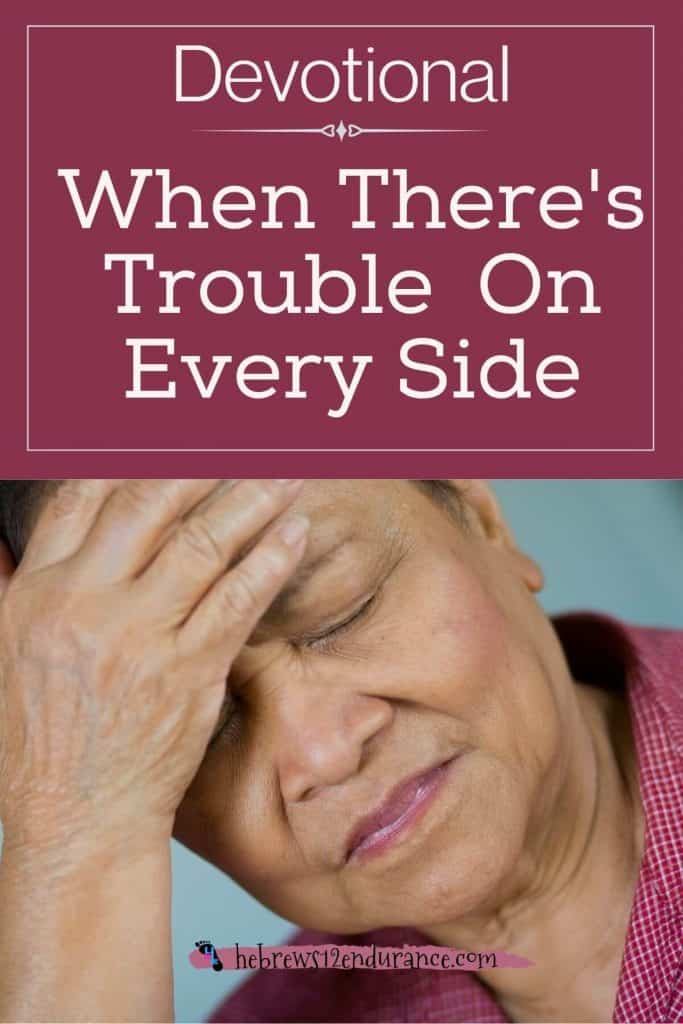