Therefore the Lord himself will give you a sign. Behold, the virgin shall conceive and bear a son, and shall call his name Immanuel. Isaiah 7:14 ESV

Today, if someone were to tell you about a virgin having a baby your first thought would be of Mary, the mother of Jesus. Then you may think of adoption or artificial insemination. While we may not know the full details of the science behind conception, we know it requires an egg and a sperm.

But the people who Isaiah was talking to would have had no idea that women could be impregnated artificially. They may not have had the knowledge that conception is really a fertilized egg, but they would have known that it takes two…and that virgins did not have babies.

The prophesy of the virgin birth

The prophecy of the virgin birth was initially given to King Ahaz of Judah. Ahaz had become king when he was twenty years old and though he reigned for sixteen years, he did not serve the Lord. Instead, he worshipped Baal and sacrificed his children in the fire.

The Lord was angry with Judah and allowed them to be defeated in battle by Israel.  But the Israelites went too far, murdering over a hundred thousand of their brothers and taking 200 thousand women and children back to Samaria as hostages.

Oded, one of the Lord’s prophets, met the convoy and told them they had displeased God. While God had allowed them to defeat Judah, Israel had their own sins which had angered God as well (2 Chronicles 28:1-15).

The hostages were returned to Jericho but the animosity between Israel and Judah did not end there. King Pekah of Israel and King Rezin of Syria formed an alliance to defeat Judah.

When Ahaz heard that these two mighty armies had risen up against him he was understandably frightened. But the Lord had a word for him through the prophet Isaiah.

Tell him to stop worrying. Tell him he doesn’t need to fear the fierce anger of those two burned-out embers, King Rezin of Syria and Pekah son of Remaliah (Isaiah 7:4 NLT).

The Lord went on to say that the invasion would not happen and within 65 years Israel would be crushed and completely destroyed (Isaiah 7:7-8).

This should have been great news for the king. But later, when Isaiah told Ahaz to ask the Lord for confirmation that the events prophesied would happen, he refused. To which Isaiah responded,

All right then, the Lord himself will give you the sign. Look! The virgin will conceive a child! She will give birth to a son and will call him Immanuel (which means ‘God is with us’). Isaiah 7:14 NLT

Today, we celebrate the virgin birth because we know the child was the Son of God who came to die for our sins. We look to heaven, grateful because God pitied us enough to deliver us from the punishment we deserved.

Yet, there are people who don’t believe that the virgin birth happened. They quote science and a host of other reasons why it’s impossible. My friend, the Almighty God is able to do impossible things. Remind yourself that the virgin birth did happen and because it did, you can be covered under the blood of Jesus, safe from the penalty of sin.

Abba, we are so grateful that You sent Your Son to die for us. We may never fully understand what You did this side of heaven but we appreciate the miracle of the virgin birth and the delivery that it means to us. Help us to put our faith in Your Son for we ask in Jesus’ precious name, Amen. 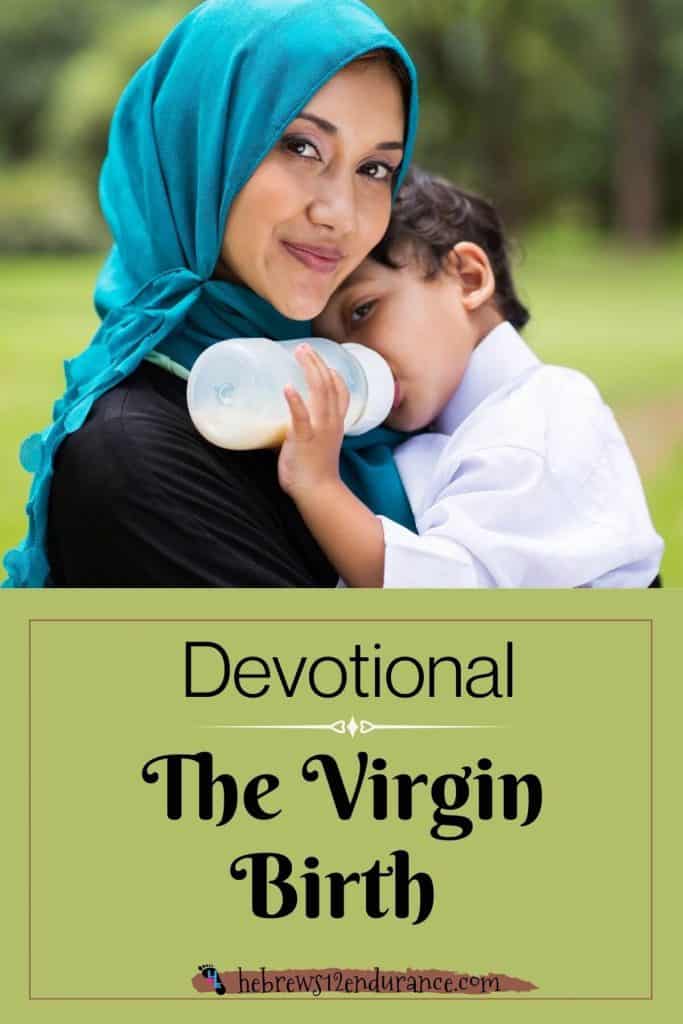