Come to Me, all you who labor and are heavy laden, and I will give you rest. Take My yoke upon you and learn from Me, for I am gentle and lowly in heart, and you will find rest for your souls. Matthew 11:28-29 NKJV

At the end of Matthew 11, we read an invitation to find rest in Jesus. He appealed to those who labored and were heavy laden to find their rest in Him.

We read Matthew 11:28-29 when we want encouragement. These days, it seems as if we’re always tired, stressed, and overburdened. We want someone to take the load from us and carry our burden. But this invitation from Jesus is so much more than it first appears to be.

While John the Baptist was in prison, he heard tales of all that Jesus had been doing in His ministry. He sent two of his disciples to ask Jesus if He was the promised Messiah or if someone else was going to come after Him.

Instead of saying yes, Jesus encouraged John’s disciples to give a testimony of what He had done,

“Go and tell John the things which you hear and see:

“The blind see and the lame walk; the lepers are cleansed and the deaf hear; the dead are raised up and the poor have the gospel preached to them.” Matthew 11:5-6 NKJV

Then Jesus told the multitude that the prophecies about the messenger who would proceed the Messiah (Isaiah 40:3, Malachi 3:10, 4:5-6) had been fulfilled in John.

Jesus then went on to rebuke the cities of Jerusalem because they had seen the miracles He had done but had not repented and turned to God (Matthew 11:20-24).

But Christ did not end with a rebuke, instead, He offered an invitation. The word translated as labor is the Greek word kopiáō, (pronounced kop-ee-ah’-o) which means to feel fatigued and by implication, to work hard.

Kopiáō is also used in the context to grow weary, tired, exhausted (with toil or burdens or grief).

The word translated as heavy-laden is the Greek word phortízō, (pronounced for-tid’-zo) which is used figuratively to mean to overburden with ceremony (or spiritual anxiety).

Jesus’ invitation wasn’t only for those who’d been working too hard. It was also for those who felt overburdened because of spiritual rites and expectations. Knowing how the scribes and Pharisees stressed ceremony and following Moses’ guidelines, we can imagine how relieved the hearers may have been to know they could find rest in God.

Take my yoke upon you meaning

But why didn’t Jesus end His invitation there? Why did He invite the people to take His yoke instead? There’s no way around carrying something, the word yoke is used to represent a burden or load. It is used metaphorically to suggest servitude. As Christ-followers, we choose the yoke of His ways instead of the yoke of the world or legalism as the Pharisees did.

The cool thing about a yoke is that it allows the weight to be perfectly balanced on both sides. It also allows for the yoked animals to walk side by side.

My friend, Jesus’ invitation also applies to us. He wants us to come to Him with our anxiety, fear, and burden, whatever their source. He wants us to know that in Him, we will find rest, the kind that allows us to take a break, recover, and renew our strength.

He invites us to choose to serve Him rather than ourselves or the world. He’s crying out to us, “Taken My yoke upon you.” because He wants to refresh you, will you accept His invitation?

Father, thank You for sending Your Son to dwell among us. We are grateful for the chance to lay our burdens at His feet knowing we never have to take them back up again.

Help us not to take them back up again. Instead, replace our burdens with His yoke that offers us balance and direction. Thank You for hearing and answering this prayer for we ask it in Jesus’ name, Amen. 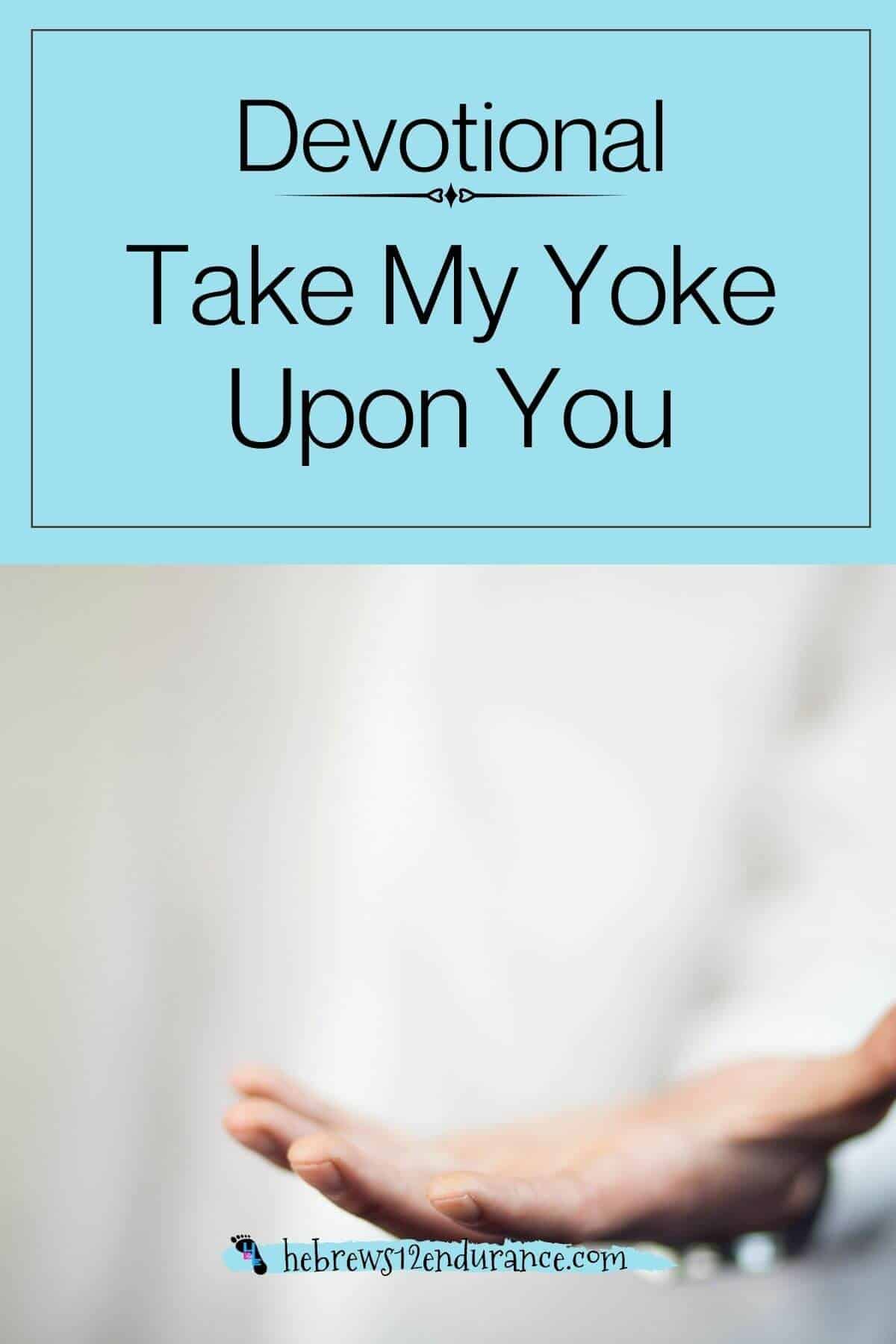 1 thought on “Take My Yoke Upon You”