After God created man, He planted a garden and put Adam there to tend and keep it.  He made Adam a steward. Let’s explore stewardship in the Bible and see how it applies to us today.

What Is Biblical Stewardship?

Before we can begin to unpack the idea of biblical stewardship, let’s define what it means to be a steward.

The Oxford Dictionary defines the word steward as (to) manage or look after (another’s property). Many of us are familiar with the stewards on a plane, train, or ship. These are persons employed for the express purpose of tending to the passengers.

If we are to understand the role of a biblical steward, we will have to go back to the beginning.

Then the LORD God planted a garden in Eden in the east, and there he placed the man he had made.

The LORD God made all sorts of trees grow up from the ground—trees that were beautiful and that produced delicious fruit. In the middle of the garden he placed the tree of life and the tree of the knowledge of good and evil.

The LORD God placed the man in the Garden of Eden to tend and watch over it. Genesis 2:8-9,15 NLT

Let’s zoom in on Genesis 2:15. The word translated as “tend” is the Hebrew word ʻâbad, (pronounced aw-bad’).  ʻÂbad means to work (in any sense). It could also be used, by implication, as to serve or to be a husbandman.

The word translated as “watch over” is the Hebrew word shâmar, (pronounced shaw-mar’) which means to hedge about (as with thorns), i.e. guard. Shâmar is also used generally to mean to protect, attend to, watch, protect, or save.

We can see right away that the role Adam was given was an important one. God created a beautiful, fruitful garden and made Adam responsible to care for it.

Biblical stewardship is caring for something that doesn’t belong to us but for which we are responsible.

What Does the Bible Say About Being a Faithful Steward?

The parable talks about a master who goes on a journey and leaves one of his servants in charge of the household. At first, the servant faithfully carried out his master’s orders, but when the master didn’t return, he began to mistreat the other servants.

This servant did not display the traits of biblical stewardship. He mistreated those over whom he had been given responsibility and treated with disdain what the master had entrusted to him.

But there are other things we can learn about stewardship in the Bible. Let’s see if we can identify the qualities of a good steward.

The characteristics of a good steward

Examples of faithful stewards in the Bible

1. Noah was called to steward the animals and people that God wanted to save from the Great Flood.

2. Abraham was a steward of the promise to create a great nation out of a wandering people, a nation that later became Israel.

3. Moses faithfully stewarded the children of Israel, serving as their guide from Egyptian bondage, and throughout the forty years they wandered in the wilderness.

4. Ezra served as a steward to the people of Jerusalem after they had returned from their 70-year Babylonian captivity. He taught them the law of God and ensured that they kept His principles.

6. The disciples served as faithful stewards teaching the Word of God and spreading the gospel throughout the world they had access to. It’s because of their faithfulness that you and I know about the gospel.

As I read A View Most Glorious I thought a lot about stewardship. By the time the book was published, Mount Rainer had been a national park for more than 120 years. But what if men and women hadn’t thought to preserve this mountain and its environs? Would it even exist today?

My Review of A View Most Glorious

Coraline Baxter agreed to climb Mount Rainer because she hoped it would generate enough support for the suffragettes but she needed a guide. Nathan Hardee had once been a member of high society but now he makes a living guiding people up the mountain.

It was clear from the beginning that Coraline knew what she wanted. I only wish that she had stood up to her mother earlier.

It takes grit to climb a mountain, especially without experience and I liked that Coraline’s stepfather supported her even if her mother couldn’t.

Nathan was a decent man. He had integrity and genuinely cared about people. Yes, he may have retreated from society when his father died, but he became a better man for it.

Know God: Nathan’s faith was a living thing and it was able to inspire faith in Coraline. Like these characters, we must cultivate a relationship with God. We can’t depend on a family member’s faith or our church attendance. The only way we can be saved is through the blood of Jesus by accepting Him as the Son of God and our Savior.

Know yourself: The character that we choose to cultivate is a reflection of our relationship with God and the values we hold dear.

Many of the characters in A View Most Glorious had to do some soul-searching to learn more about who they were. This was especially true of Cora and Nathan who had to decide if they wanted a place in high society along with all the posturing and games that came with that lifestyle.

Run your race: Ultimately, each of the main characters in A View Most Glorious had to make a choice: would they follow the path others expected them to? Or would they do what made them happy and caused them to fulfill their purpose?

The romance between Cora and Nathan sprang out of respect and mutual admiration and the reader can’t help but root for their relationship to work out in spite of the obstacles.

There was a theme of stewardship and worship. God has given us His creation to take care of. Will we do a good job of tending to His creation or will we reap the resources until the earth is laid bare? When we preserve God’s creation, our worship is a natural response to the beauty around us.

A View Most Glorious was a fitting end to the American Wonders Collection trilogy. I enjoyed reading Cora and Nathan’s story and learned a little bit of history along the way.

I received an advanced reader’s copy from the publisher through NetGalley and the Revell Reads program; a positive review was not required. Purchase A View Most Glorious on Amazon | Baker Books

About A View Most Glorious

Headstrong Coraline Baxter has worked all her life to be more than the spoiled socialite others expect. When her fellow suffragettes in Tacoma, Washington, suggest that she should climb to the top of Mount Rainier to prove that a woman can do anything, she instantly resolves to do it. And if she can climb Mount Rainier, her mother promises to stop pressuring her to get married to the wealthy Cash Kincaid. All Cora needs is a guide to get her to the top of the mountain.

Nathan Hardee may look like a mountain man, but he once ruled the halls of high society. He left all that behind after his father broke under financial pressure from Kincaid. To best Kincaid now, Nathan agrees to guide Cora up the mountain.

Climbing Rainier will require all of Cora’s strength and will lead her and Nathan to rediscover their faith in God and humanity. These two loners make unlikely partners in righting a wrong and may just discover that only together is the view most glorious.

Regina Scott started writing novels in the third grade. Thankfully for literature as we know it, she didn’t actually sell her first novel until she’d learned a bit more about writing. Since then, she’s had published more than 50 clean historical romances.

Regina Scott has learned to fence, driven four-in-hand, sailed on a tall ship, and dressed as a Regency dandy, all in the name of research, of course. She makes her home in the Puget Sound area of Washington State with her beloved husband.

We are all stewards of what God has created. We are stewards of the gifts, talents, and resources He has given us. If you’re still wondering how to be a good steward of God, stick to these three principles of biblical stewardship.

Have you been a faithful steward? I pray that this look at stewardship in the Bible has served as a reminder of the important task we have been given as co-laborers with God. 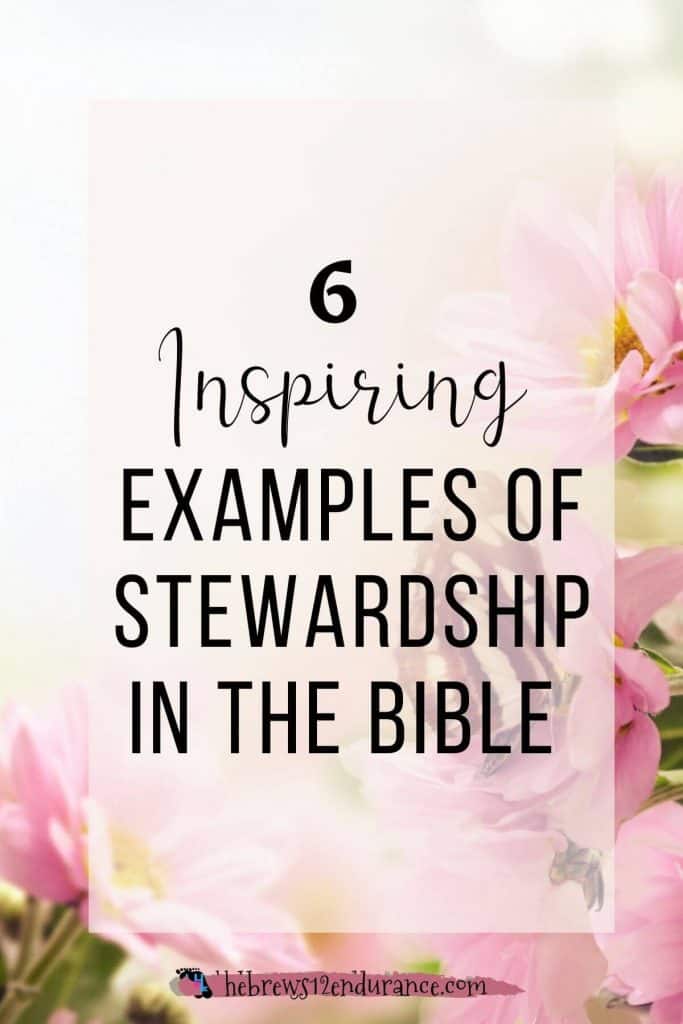