Growing up in Jamaica I heard a lot of pithy wisdom wrapped in one sentence quotes. This was especially true of the older folks. It seemed as though the older a person was, the more Jamaican proverbs they quoted. The Bible also talks a lot about the importance of wisdom, but what does it mean to be wise?

What Does It Means To Be Wise?

So being wise means acting with or expressing experience, knowledge, or good judgment. A wise person makes good decisions and is generally able to offer sound advice. All good things, right? Yet the Bible talks about the dangers of being wise in your own eyes (Proverbs 3:7). This leads to the question: what makes you wise?

This post may contain affiliate links. You can read my full affiliate disclosure here.

The Bible talks about two types of wisdom. According to James 3:13-17, there is demonic or sensual wisdom and heavenly wisdom. Each of them has its own characteristics. 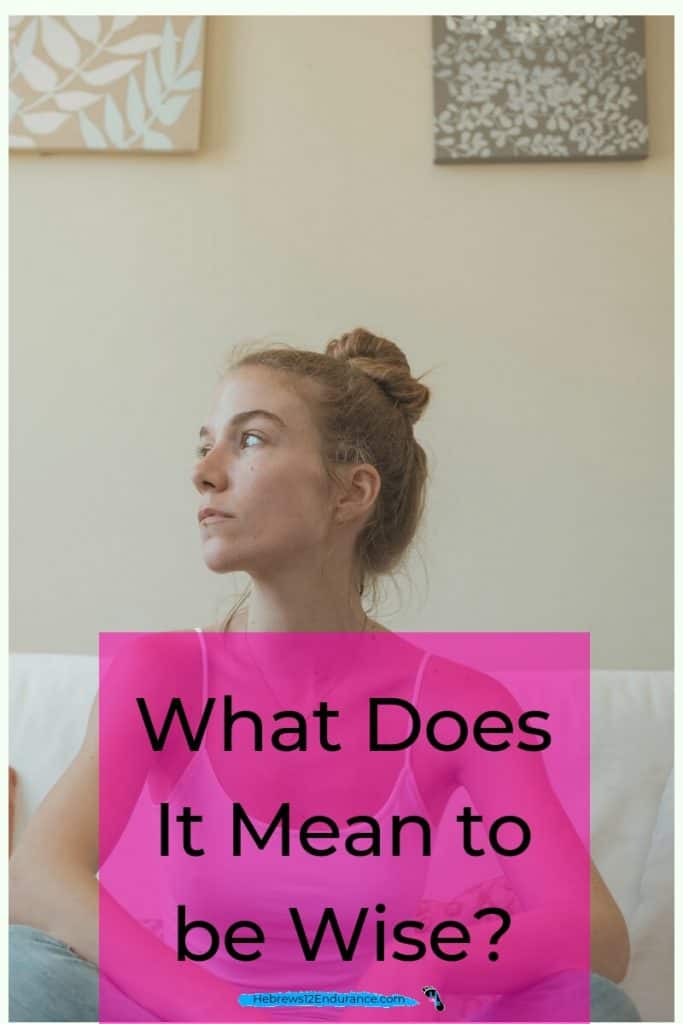 Sensual wisdom is characterized by bitter envy and self-seeking (James 3:14). In other words, this type of wisdom comes with a feeling of discontented or resentful longing for what other people have. It wants the qualities, possessions, or other things belonging to other people. This leads to strife and fighting. It also comes with a “me-first” mentality where you are seeking to elevate yourself.

Heavenly wisdom, on the other hand, is characterized by good conduct because it is pure, peaceable, gentle, willing to yield, full of mercy and good fruits, doesn’t show partiality or hypocrisy (James 3:17). This kind of wisdom seeks to build others up instead of tearing them down. This is the wisdom that comes from God.

How to Get Wisdom

So how do you develop wisdom? The right kind of wisdom? Proverbs 9:10 tells “The fear of the Lord is the beginning of wisdom, and the knowledge of the Holy One is understanding.” And yes, there’s a difference between wisdom and understanding but we’ll talk about that later.

What Does It Mean to Fear God?

Now you may be wondering if a fear of the Lord is the beginning of knowledge, what does it mean to fear God?
The word translated as fear in Proverbs 9:10 is the Hebrew word yirʼâh (pronounced yir-aw’). It could also have been translated to mean reverence. When the bible says we are to fear the Lord it means we are to show Him reverence.

If you want to be wise you must first acquire an understanding of who God is. Click To Tweet

If you want to be wise, you have to first acquire an intimate knowledge of who God is. We fear God when we give Him the honor and glory due to His name.

The Difference Between Wisdom and Understanding

These two things start with knowledge. Knowledge is an awareness of facts or information. It’s also the acquisition of skills either through experience or education. When you know something you have a collection of facts or experience in your head.

Understanding takes it a step further—it is the ability to comprehend something. So you see or hear something and you know what it means wisdom is the greatest of them all like it the application of your knowledge. It is understanding in practice.

Solomon: The Wisest Man Who Ever Lived

Now that we have all the definitions out of the way, let’s look at a wise person example. Solomon had the distinction of being the wisest man on earth. The great Queen of Sheba traveled to Jerusalem to meet with him to see if the stories she had heard about him were true (2 Chronicles 9:1-12).

The three books he wrote—Song of Solomon, Proverbs, and Ecclesiastes—are filled with bite-sized pieces of wisdom and knowledge. Yet, even the wisest man was wooed away from serving the true God: Jehovah.

When we first met Solomon in 1 Kings 3:1, he had already made a treaty with Pharaoh the king of Egypt, and married his daughter. This was a direct violation of God’s commandment. The children of Israel were told not to intermarry with the heathens lest their hearts be drawn away from Almighty God (Deuteronomy 7:2a-4).

Yet in spite of this, God appeared to him and offered to grant him the desires of his heart. He asked for a discerning heart so he could properly judge God’s people. For his humility and wise decision, God gave him wisdom.

God had put Solomon in a position to be a beacon of light pointing to Himself; a light the rest of the world could see and follow. Solomon should have led the worldwide movement of worship of the Israelite God. Until he forgot to follow his own teachings: He became wise in his own eyes (Proverbs 3:7).

Solomon married many foreign women and his wives turned away his heart from God (1 Kings 11:1-8). Maybe he thought he was too wise to get caught in the web of idolatry. Or maybe he thought he could stop whenever he wanted to.

The book of Proverbs repeatedly admonishes us to fear the Lord and abstain from evil (Proverbs 1:6, 4:27). We are told to avoid the company of the wicked (Proverbs 1:10-16) and to live by the commandments of the Lord (Proverbs 19:16). He started out so well! His future had been so bright.

Are we like Solomon? Have we become “wise in our own eyes”? Do we say to the world, “this is what God says we should do”? And then do the exact opposite? What’s your legacy? It’s hard to live a Christian life by ourselves until we realize that we don’t have to. Through the help of the Holy Spirit, we have the power to do that which we are unable to do by ourselves.

Have we become “wise in our own eyes”? Solomon was the wisest man on earth until he wasn't. Click To Tweet

Solomon was the wisest man on earth. And then he wasn’t. He stopped focusing on God and instead allowed others to lead him down a path that he knew was wrong. He forgot how to make worship part of every day. We need to learn a valuable lesson from Solomon: whenever we take our eyes off Jehovah, we have started down a slippery slope.

For a deeper look at Solomon’s life, check out the free online Wisdom Whispers Bible study offered by Living by Design Ministries.

Lord, today I want to keep my eyes firmly fixed on You. I can do nothing on my own but with You, I can do all things. Thank You for the lessons of the Bible and help me not to be like Solomon who was drawn away through his own lusts. Instead, help me to hold firm to Your words and keep my foot from evil. In Jesus’ name, Amen.

Today, I encourage you to write a short prayer asking God to help you to keep your eyes on Him.