For several months, I had the privilege of observing a beekeeper at work. During that time I learned a lot about bees. I also realized how much I could learn lessons from bees about … being a Christian.

The Lessons Bees Can Teach Us

Have you ever thought about the things we could learn from bees? It’s not about honey, it’s about worship. Now, I know you’re probably thinking, ‘That girl has been stung one too many times’, but aren’t you a little bit curious to see if I actually have a point?

If you’re even a little bit curious, here are ten lessons we can learn from bees about being good Christians:

1. Always be on the lookout. Whenever you approach a hive the first thing you may notice is that the concentration of bees gets thicker the closer you get.

What you may not have known is that that your approach did not go unnoticed. That’s because of the scouts. There are some bees that are always on the lookout for predators and food.

Too often we fall into the trap of starvation and deny our souls that which we need for survival.

We are unable to recognize our enemies and so we fall into their traps oh-so-easily. And then we complain, as Jamaicans do that the “devil strong”. The truth is God has already won the victory over satan, we just fail to collect the spoils of war.

2. Get rid of anything that would hamper productivity. Bees keep a clean hive. They remove all foreign matter and debris before beginning the work of storing honey.

Are you storing clutter? Do you need to remove some distractions from your life? Are you working to your full potential? What are those things that you may need to remove from your routine to increase your productivity? Take a lesson from the bees and get rid of anything that is unnecessary.

3. Know when to cut certain people out of your life. There are three main categories of bees: drones, workers, and queens. During the winter when food is scarce, the worker bees run the drones out of the hive to preserve food.

Sometimes we have a bad habit of remaining friends or close contact with people we shouldn’t.

We pursue these negative relationships to the point where it becomes unhealthy for us.

Learn from the honey bee: know when to cut certain people out of your life. #christianliving #lifelessons #hebrews12endurance Click To Tweet

I once had a friend that my mother worked very hard to separate me from. With her mother’s eyes, she could see that this girl was a bad influence on me but I couldn’t see it.

It wasn’t until much later that I truly saw the negative impact that she was having on me. Are we allowing the people in our lives to open our eyes to influences that may not be in our best interests?

4. Know your role in the kingdom. The queen’s job is to mate and lay eggs. The workers feed the queen, harvest pollen, clean the hive, and make honey.

Some bees are nurses, others are scouts, and some lay unfertilized eggs (aka drones). Each bee has a role to play in the hive.

What is your role in the kingdom of God? Do you know it? Have you taken any steps to find out your kingdom purpose? Have you listened to the still small voice that tries to influence you towards a particular calling?

5. Give your allegiance to one ruler. There can only be one queen in a hive. Always. In cases where there are two queens in one hive the second queen either has to leave the hive or is killed.

It can be as simple as overeating or drinking or smoking. It could be social media or incessant pinning on Pinterest… We were made to serve one ruler and that’s what we’ll do.

Let’s take that lesson from the bee and apply it to worship. If we gave God the best of what we had … our time, our efforts, our words, our praise… what would it look like? What would it sound like? Would it be worthy of a king? Would it be royal jelly?

7. They live to serve. Baby bees feed the queen. Worker bees store pollen and make honey. Scouts are on the lookout for food and danger. The drones give their lives to mate with the queen (literally, y’all–you should check out this article on drone mating on Wikipedia).

How are we serving the master? What have we done for Him lately?

Related: What’s Your Attitude Towards Service?

8. Bees are ready to give their lives for a cause. If I asked the question, ‘What would you die for?’ What would be your answer – your honest, gut-deep answer and not just the one that rolls smoothly off the tongue?

I’ll be honest – I don’t know what my answer would be but I want it to be Jesus, don’t you? I want to be willing, like the apostles, to die for him.

Bees routinely give their lives to defend the hive. Would you give your life to defend other believers?

9. Work together for the common good. Bees have a number of natural predators. In a weak hive, the predators thrive.

Dozens of bees get eaten by lizards or birds. Beetles, moths, ants, and roaches invade the hives and make it unpalatable for the bees. At that point, the bees are very dependent on the beekeeper to tend the hive and rid it of the interlopers. If enough of these enemies show up, the bees will leave the hive.

But, when the hive gets strong enough, the bees defend themselves. They will attack anything that doesn’t belong.

Together they are strong enough to kill a lizard, I’ve even heard stories of bees stinging cows to death. One bee is just a little sting, but a hive of bees? They’re a lethal weapon. Now isn’t that a cool lesson we can learn from bees?

10. Teamwork produces golden treasure. Samson once asked the question, “What’s sweeter than honey?” Thousands of years and many, many experiments later (one of which eventually produced high fructose corn syrup) the answer is still ‘nothing’.

Now I won’t gross you out by telling you that the delicious nectar that you enjoy is the result of dozens of bees vomiting into each other’s mouths … what I will tell you is that honey is the beautiful result of oodles of hours of bee labor and hundreds of miles flown to get the perfect blend of nectar and pollen.

What beautiful treasure would God’s children be able to create if they worked together in love? The possibilities are almost endless when one contemplates the power of a creative God.

Some people may look at bees as simple insects, yet there are so many lessons we can learn from observing bees. What was your favorite bee lesson? 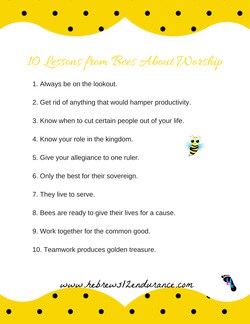 2 thoughts on “10 Lessons from Bees About Serving God”