Moses’ story shows the impact that love and compassion can have on a person’s life. When he was born, his mother saw how beautiful he was, and risked her life to save him (Exodus 2:2). She decided to hide him from Pharaoh though she knew the law demanded that all baby boys were doomed to death.

Several people must have known that Jochebed had been pregnant. But then, 9 months later, the child they had been waiting for could not be presented. Did people wonder what had happened to Jochebed’s child? Or did they suspect the truth and waited to see what would happen? At that time, Jochebed had at least two other children: Aaron and Miriam.  Can you imagine what it must have been like to live in that household?

Had Aaron and Miriam been coached to say nothing about their little brother? Did they have to be confined to the house so they wouldn’t accidentally disclose the secret? Or did they too have compassion for him because they knew if the Egyptians found out about him he would have been killed?

When Pharaoh’s daughter saw the baby floating in the basket, she felt compassion for him and made the bold choice to save his life.

And when she opened it, she saw the child, and behold, the baby wept. So she had compassion on him, and said, “This is one of the Hebrews’ children.” (Exodus 2:6 NKJV)

Oh, she knew the mandate was that all the Hebrew boys should be killed, but what a risk she took to spare his life! Can you imagine how she must have fought to justify her choice to her contemporaries? To her father? What would have happened if the daughter of Pharaoh had turned away from the crying child? 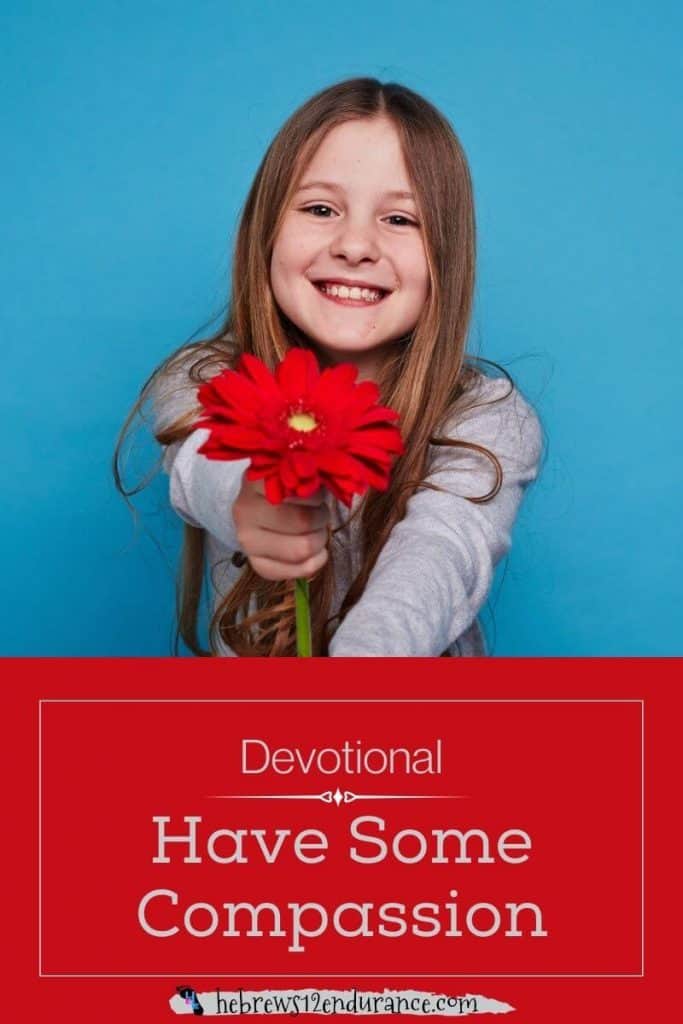 Compassion means to have sympathetic pity and concern for the sufferings or misfortunes of others. It involves getting engaged in what the other person is going through.

Do you have compassion for others? Do you put yourself in the shoes of another person and consider how they feel? As children of God, we are called to have empathy for others.

But there’s a greater story of compassion here. There’s the story of the compassion God had for His people. It was no coincidence that Moses had been spared. Eighty years later, God would call to Moses from a burning bush,

And the LORD said: “I have surely seen the oppression of My people who are in Egypt, and have heard their cry because of their taskmasters, for I know their sorrows (Exodus 3:7 NKJV).

God would use Moses as the spokesperson to deliver the Israelites from their Egyptian bondage. God’s compassion for His people moved Him to action. He did not allow them to remain in Egypt where they would continue to face hardship and slavery from their task masters. Instead, He rescued them from slavery and adopted them inti His family. He prepared for them a place to live where they would have more than enough to eat and no task masters over them.

God still feels compassion for His people today. His compassion moves Him to act on our behalf. Are you experiencing hardships and trials? Cry out to God as the Israelites did and watch God act on your behalf.

Abba, thanks for having compassion on Your people. I pray that You will move in my life today. Help me to have compassion for others around me and to show them Your love. In Jesus’ name, I pray, Amen.

3 thoughts on “Have Some Compassion”