God Is With You in the Battle

As Christians, one of the things we’re guaranteed is struggles and difficult times. We know we should put on the whole armor of God before we face the evil one, but sometimes we forget that we don’t have to fight the battle alone. My friend, if that’s you today, I want to remind you that God is with you in the battle. He has not left you on your own.

How to Let God Fight Your Battles

The biggest challenge many Christians face is letting God fight the battle for us. Oh, we know the right words and can say “The battle is not yours, it’s the Lord” with the best of them, but do we really understand that God is in the battle with us? Do we truly understand how to let God fight our battles?

Before I share what I believe is the biggest key to letting God fight our battles, I want to remind you that God is with you in the battle. If you’re going to let God fight your battles for you, you have to submit your will totally and completely to Him. I know.

The thought of not being in control of everything is scary. It’s not something we’re used to because we have been told for years that we need to be brave and learn to do things on our own.

But you see, that doesn’t work when it comes to spiritual warfare. Yes, we are to put on the whole armor of God but that’s just to make us battle-ready.

The armor is there for our protection–it’s not to make us think we’re superwomen or Captain America. It’s for us to learn to direct our focus to God and allow Him to fight the battle for us.

The armor is there for our protection--it's not to make us think we're superwomen or Captain America. It's for us to learn to direct our focus to God and allow Him to fight the battle for us. #spiritualwarfare #hebrews12endurance Click To Tweet

Sometimes it’s difficult for us to remember we need to let go and let God fight our battles and that’s where Christian fiction comes in. I love to see characters who experience the challenges and struggles I go through because it takes me out of my situation so I can see it clearer. This week’s book–God’s Rebel–had a strong theme of spiritual warfare and allowing God to fight the battle for you.

Okay, so when I read the line “Evil wants her for itself, and if it can’t have her, it will kill her”. I thought it was symbolic. Somehow I missed the part about this being a Christian fantasy and so I was completely unaware when evil tried to kill her—literally. Ms. Janene painted a very vivid picture of the war between good and evil. She depicted the spiritual warfare as a physical one and it was very scary.

Know God—Mariamne did not know who God was. She had never experienced His love and had been treated so poorly by people she doubted that anyone could be truly good. But Halton and his men knew God and showed her how differently men can act when they answer to a higher power.

A prevalent message in God’s Rebel is that we should seek to know God for ourselves and should search for those who don’t know Him and teach them His ways. We are here to make disciples and tell others about the love of God.

We are also reminded that spiritual battles happen all the time and we need God’s help to survive the battles and have victory in the war.

Know yourself—Mariamne had incomplete knowledge about herself. Her life had been so hard she had forgotten her early years and her true identity. It wasn’t until she truly began to know herself that things began to change for her.

As she opened herself up to the knowledge of God, she learned more about herself and was able to deepen her relationship with Him. When Mariamne accepted that she belonged to God and He loved her, she was able to see past the lies of the enemy and remember that God was with her in the battle.

Run your race—the thane, the king, and everyone in the kingdom had a role they wanted Mariamne to play. But it wasn’t until she decided to run the race set before her that she began to embrace the role she was to play in this story.

This is a strong reminder that people can expect many things from us but ultimately we have to make a decision. Will we stick to the path God has laid before us? Or will we struggle against His plans for our life to our detriment?

In a lot of ways, Mariamne’s behavior was immature and childish and I guess we could chalk it up to her background as being a slave. Still, there were times when she acted without thinking of the consequences and ended up in deeper hot water than she started out.

She was a lot like many of us in that way. We don’t always think about the consequences of our actions or the impact our words will have.

I did not like the way the king and his men casually decided to lie about Mariamne and the king’s relationship when faced with the ultimatum from the king’s men. He was the king—why did he have to do what they said?

Overall, God’s Rebel is an interesting book with a strong theme of spiritual warfare and what happens when we allow God to use us. We are reminded that unless we open ourselves to God’s power we will never have the resources to defeat the enemy.

When it comes to spiritual warfare, it not we who fight the enemy but God who fights through us.

When it comes to spiritual warfare, it not we who fight the enemy but God who fights through us. #spiritualwarfare #hebrews12endurance Click To Tweet 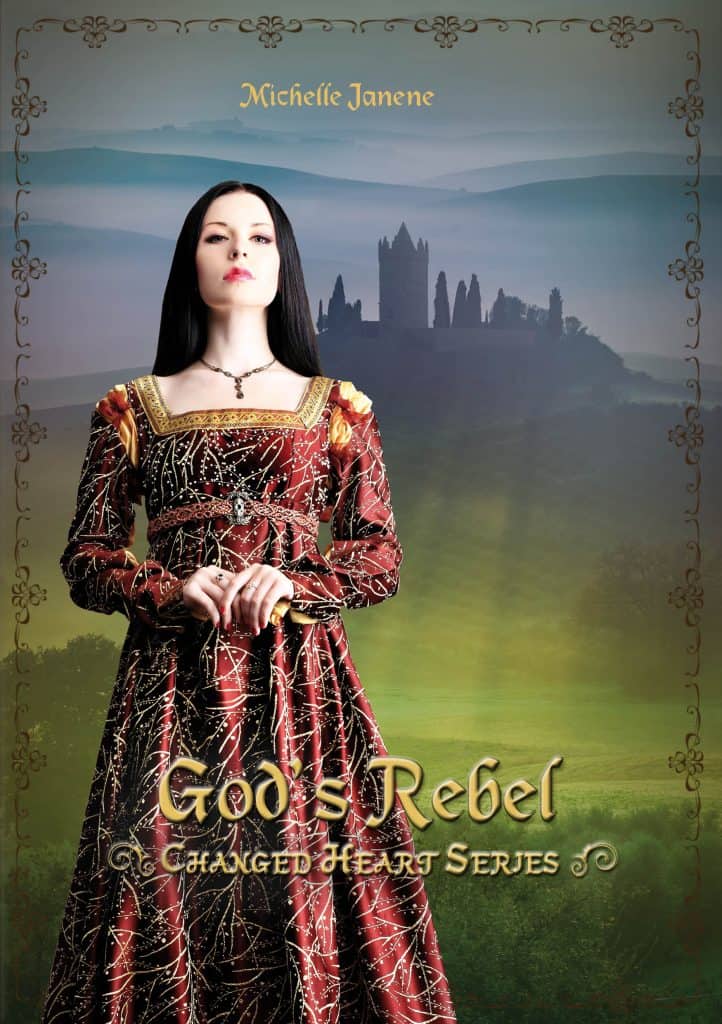 She is a woman without a name. Chosen by men for her beauty, she refused to bend to their desires. Beaten and sold to a slave trader, she is left to die in a putrid dungeon.

Everything changes when she’s purchased by the Thane of a foreign king and given a Jewish name.

The king needs her to save his kingdom. God calls her to an unimaginable future. Evil wants her for itself, and if it can’t have her, it will kill her. Mariamne wants none of the possibilities she’s offered.

Mariamne needs only to surrender to achieve an amazing destiny.

Halton, the king’s thane, buys a number of slaves for his kin. One of them is a woman who had not been given a name. He gives us a Jewish name—Mariamne.

The king needs her to save his kingdom; God has a purpose and plan for her life but all Mariamne can think of is being free. But her life is in danger and evil wants to kill her and Mariamne is stuck with choosing between two unwanted futures.

Michelle Janene lives and works in Northern California, though most days she blissfully exists in the medieval creations of her mind. She is a devoted teacher, a dysfunctional housekeeper, and a dedicated writer. She released her first novella Mission: Mistaken Identity in the fall of 2015, and has been published in several anthologies. She leads two critique groups and is the founder of Strong Tower Press—Indie solutions for indie authors.

“You will not need to fight in this battle. Stand firm, hold your position, and see the salvation of the Lord on your behalf, O Judah and Jerusalem.’ Do not be afraid and do not be dismayed. Tomorrow go out against them, and the Lord will be with you” (2 Chronicles 20:17 ESV).

‘For the Lord your God is he who goes with you to fight for you against your enemies, to give you the victory’ (Deuteronomy 20:4 ESV).

When the righteous cry for help, the Lord hears and delivers them out of all their troubles (Psalm 34:17 ESV).

What then shall we say to these things? If God is for us, who can be against us? (Romans 8:31 ESV)

But they who wait for the Lord shall renew their strength; they shall mount up with wings like eagles; they shall run and not be weary; they shall walk and not faint (Isaiah 40:31 ESV).

For not by their own sword did they win the land, nor did their own arm save them, but your right hand and your arm, and the light of your face, for you delighted in them (Psalm 44:3 ESV).

But the Lord is faithful. He will establish you and guard you against the evil one (2 Thessalonians 3:3 ESV).

“No weapon that is fashioned against you shall succeed, and you shall confute every tongue that rises against you in judgment. This is the heritage of the servants of the Lord and their vindication from me, declares the Lord” (Isaiah 54:17 ESV).

‘You shall not fear them, for it is the Lord your God who fights for you’ (Deuteronomy 3:22 ESV).