Friendship is one of the most precious gifts that we have been given. Yet, it is sometimes fraught with tensions and pitfalls. Thankfully, God has not left us to navigate this important part of life alone. He has given us lots of advice and clues to look out for. Let’s explore some Bible verses about friends to see what God has to say about this relationship.

What Does the Bible Say About Friendship?

The Merriam-Webster Dictionary defines friendship in the following ways:

In other words, friendship involves being a friend to someone. We do that when we have and exhibit respect or affection for someone else.

Friendship is all about relationships, about esteeming someone above yourself. God created us as social beings. We are supposed to be in community with God and each other. It shouldn’t surprise you then to learn that the Bible has a lot to say about friendship.

Let’s look at just a few Bible verses about friends to see what we can learn.

Jesus is a friend to all. I know we say this a lot on this site but it bears repeating: Jesus died for our sins. He died for us long before we acknowledged Him as Lord and Savior. He died for everyone…even those who will never acknowledge Him. If you’ve never thought about it before, take some time right now to think about what it means that Jesus is your friend.

The word translated as “corrupt” is the Greek word phtheírō, (pronounced fthi’-ro). Phtheírō could also mean to shrivel or wither

When used figuratively, phtheírō means to ruin by moral influences

If we spend time around people with loose morals and bad habits it will begin to affect us. I know a lot of Christians think that because we have a responsibility to evangelize the world we should be friends with sinners. We do this thinking that we’ll be able to influence them for the kingdom.

Unfortunately, the Christian often starts to let go of their moral values and eventually drift away from God. While we should be friendly to those who don’t know God, we need to exercise wisdom in how close we allow them to get to us.

Friends encourage each other and build each other up. Have you ever had one of those “friends” who only had negative things to say about you? They picked at your confidence until you felt unworthy. If you haven’t already figured it out, that person is not your friend. A true friend encourages you to do good life-giving things.

Two are better than one, because they have a good reward for their toil. For if they fall, one will lift up his fellow. But woe to him who is alone when he falls and has not another to lift him up! Ecclesiastes 4:9-10 ESV

A godly friendship is a supportive one. According to this Bible verse about friends, a friend is willing to support you when you need it. A person is stronger when they have friends who can help them.

I love proverbs. They typically pack a whole lot of truth into a short, memorable sentence. The book of Proverbs has a lot to say about friendship. Some of the lessons we will learn from these Proverbs about friendship are confirmed in other books of the Bible.

Do your friendships make you better? They should. Our friends should help us hone our skills, they shouldn’t encourage us to continue things that destroy us.

This proverb is sometimes rendered as: A man who has friends must himself be friendly,
But there is a friend who sticks closer than a brother. (NKJV)

The lesson seems to be slightly contradictory based on the translation. On one hand, if you want to have friends you must act friendly towards others. At the same time, too many “friends” can become a problem. 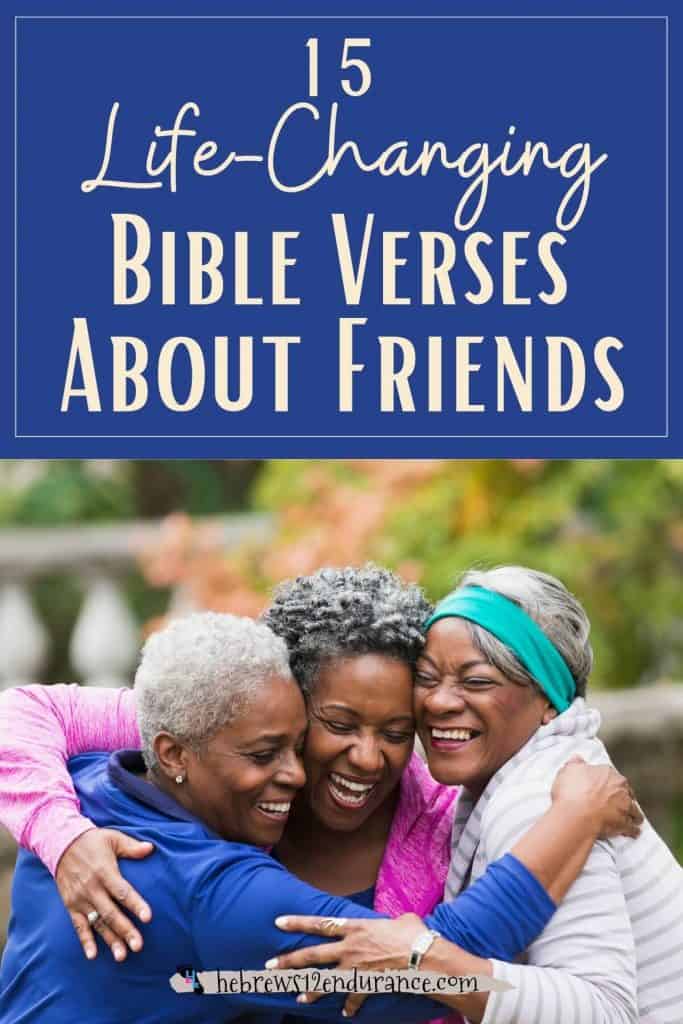 I actually believe that the message of this proverb is true regardless of the translation. You don’t attract a lot of friends by being surly and disagreeable. But having too many “friends” especially those who are not genuine or godly can be to our detriment.

Have you ever noticed how easy it is to fall into bad habits, especially when you are surrounded by people who constantly do it? The Bible says anger is contagious. If we surround ourselves with easily angered people, we will become people who are easily angered too.

As Christians, we should choose our friends wisely because we understand the impact the people we spend time with can have on us.

These three proverbs about friendship seem to be saying the same thing: wealth can attract a flock of fake friends. It, therefore, means that we need to learn how to differentiate between fake friends and people who genuinely care for us.

Has a friend ever been told you something about yourself that was true but painful to hear? I bet you have. And maybe it took you a little time to accept the truth or to get over the sting of what your friend said. But here’s the thing: a true friend is going to tell you the truth with love.

She will speak truth because she wants you to grow in a particular area, she will not be saying things deliberately to hurt you.

On the other hand, some people flatter you, but they don’t mean you any good. This proverb about friendship is a reminder that it’s better to hear the truth from someone who loves you (even if it hurts) than to be told flattering, pleasing things by someone who doesn’t have your best interest in heart.

Our friendships matter to God. I hope you have been encouraged to spend some time to find even more great Bible verses about friends as you learn to honor this God-given relationship.