Is your faith fireproof? As we’ve gone through this series, we’ve learned that faith is an important component in fear fighting. If we want to conquer our fear, our faith has to be fireproof strong.

When something is fireproof it is designed to withstand high temperatures. It may help to slow the spread of a fire. I’m using “fireproof” to refer to the type of faith that the three Hebrew boys had.

As captives living in a strange land, it couldn’t have been easy for these young men to defy King Nebuchadnezzar. Especially because of the position they held in the king’s court. These young men had been taken from their homeland and thrust into a foreign culture. Through some fortune, they were chosen from amongst their fellow captives to serve in the king’s court after receiving three years of the best education known to Chaldean society (Daniel 1:3-6).

At the end of their training, Daniel, Hananiah, Mishael, and Azariah impressed the king and were chosen to be leaders in his court. With the king’s permission, Daniel appointed Shadrach, Meshach, and Abednego rulers over the affairs of the province of Babylon. But Daniel remained at the king’s court (Daniel 2:19).

We don’t know why Nebuchadnezzar decided to build a giant statue and have people worship this representation of himself. I suspect it had to do with the dream referenced in Daniel chapter 2. In response to God’s revelation that Babylon would not be a mighty power forever, Nebuchadnezzar felt driven to prove his dominance.

His fear caused him to defy the Almighty God.

Sometimes like Nebuchadnezzar, our fear causes us to act in a way that is not in keeping with our identity in God. Jehovah reveals something for us in order to recognize that He is God and that He’s in complete control but we panic. Instead of rejoicing in the fact that our God holds the future, we worry about our role in a future that has not yet happened.

The Trouble with Faith

King Nebuchadnezzar sets up his new statue in Babylon. He makes a decree that when a certain song is played, everyone should bow down and worship the image that he had set up. He made sure that every leader in his administration was aware. These men would have to enforce his law when he wasn’t there. But Hananiah, Mishael, and Azariah – also known as Shadrach, Meshach and Abed-Nego – (isn’t it strange how we know them by their Babylonian names and not their Hebrew ones?) didn’t bow.

Their enemies were quick to accuse them. What I find interesting is that only these three boys were accused of disobedience among the Jews. Is it that every other Jew had bowed down before the king’s idol?

The trouble with faith is that sometimes you have to stand alone. A lot of times we look to our peers to give us social cues. We want them to validate our actions and to approve of us. But when it comes to faith, we have to be willing to stand alone.

The trouble with faith is that it doesn’t always protect you from the thing you fear. Shadrach, Meshach, and Abed-Nego knew that disobeying the king had real consequences. They had a choice: disobey the king or disobey God?

They chose the first option even though they knew that it could mean their death. And not just any kind of death – they would be burned alive.

Have you ever been splashed by oil while you were cooking? Or have you ever been scorched by iron or some other heated piece of metal? It really hurts, doesn’t it? These young men were willing to experience heat great enough to roast human flesh.

But Shadrach, Meshach, and Abed-Nego had fireproof faith. King Nebuchadnezzar was angry that there was someone who dared to defy him. He probably flashed back to the dream and remembered that God had told him that he wasn’t all-powerful. He felt the need to exert his power – to prove he was in control.

He had the three young men brought before him. Did he think that when they saw him dressed in his royal robes they would change their minds and do as he had told them? Instead, they said these words:

“O Nebuchadnezzar, we have no need to answer you in this matter. If that is the case, our God whom we serve is able to deliver us from the burning fiery furnace, and He will deliver us from your hand, O king.

In other words, the God they served was able to save them from anything that Nebuchadnezzar wanted to do to them. But even if He didn’t, He was still Supreme God.

That’s what made their faith fireproof. They believed that God was still God even if He did not deliver them. That’s the missing element for most of us. We believe that God is mighty, but we want Him to proof it. We think that if He doesn’t do what we ask Him to do that, He’s less of a God.

But Jehovah wants people who know Him intimately and will serve Him regardless of how we’re feeling at the moment. He wants us to be willing to face the fires of life knowing that as we walk through the fire, He will be with us and we will not be burned (Isaiah 43:2).

Fireproof faith allows us to boldly declare that God is sovereign over our circumstances. #facingourfears #hebrews12endurance Click To Tweet

Challenge: What steps can you take to fireproof your faith today? 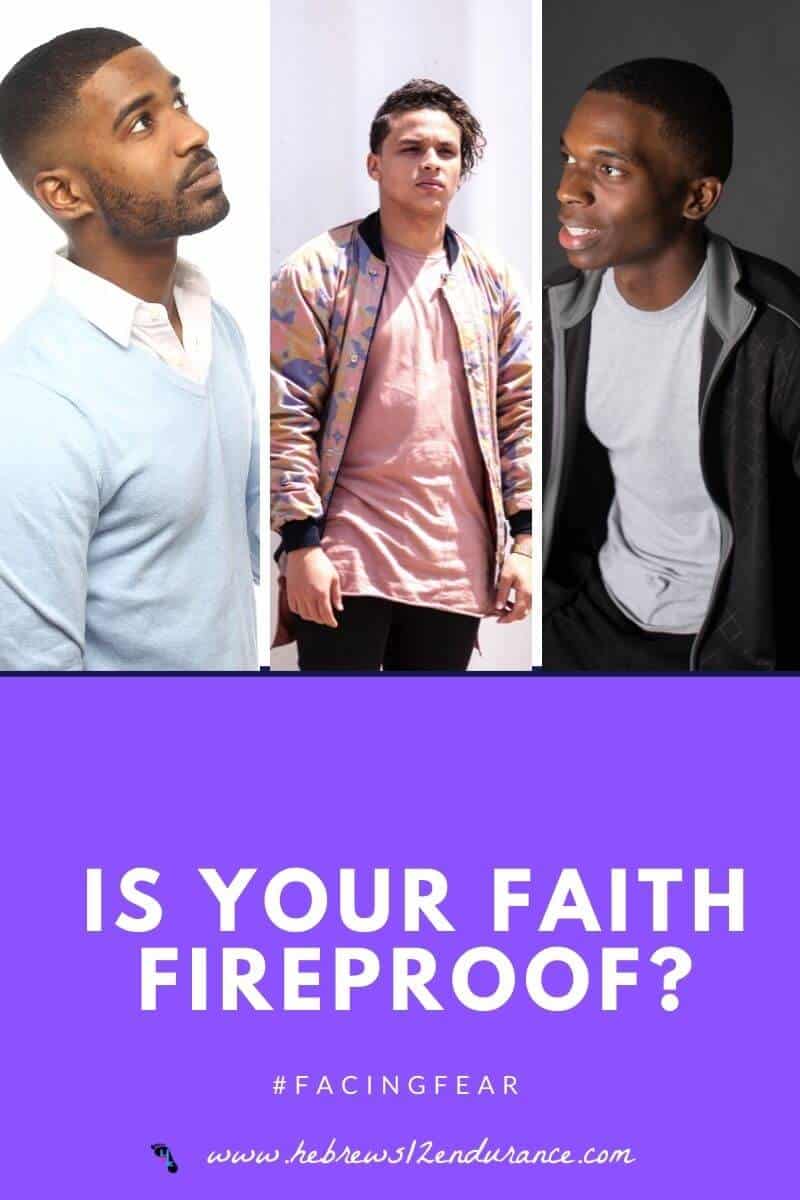