The book of Ezra is one of several books written after the children of Israel returned from their exile. Ezra may be found between the books of 2 Chronicles and Esther in the Bible.

Who Wrote the Book of Ezra?

Authorship of this book has been ascribed to Ezra the scribe though some of the events referenced in the book took place before he got to Jerusalem.

Ezra is a scribe and priest who had been sent to Jerusalem by King Artaxerxes. Ezra was a descendant of Aaron (Ezra 7:1-5).
The name Ezra means help, which is befitting since he was sent to Jerusalem for that purpose.

The book of Ezra is a recounting of the events that followed the children of Israel’s return to the Promised Land. In the first year of Cyrus’ reign, he made a decree that God had appointed him to rebuild the temple in Jerusalem.

Anyone who wanted to be a part of that expedition was free to return to Jerusalem and would be supported financially by those who remained behind (Ezra 1:1-5).

Almost fifty thousand people returned to Jerusalem in the first group of returned exiles (Ezra 2:64-65). When they returned, they rebuilt the altar and restored the sacrificial system (Ezra 3:1-6). But they received opposition and were forced to stop the work. Work on the temple remained on hold until the reign of King Darius (Ezra 4).

After 10-15 years of inactivity,  the Lord raised up the prophets of Haggai and Zechariah to encourage the people. Work resumed and the temple was completed (Ezra 5-6).

About 60 years after the temple was rebuilt, Ezra was sent to Jerusalem to teach the people of Israel the Law of God (Ezra 7). Another group of about two thousand exiles returned with Ezra (Ezra 8:1-14, 19-20).

Ezra went to Jerusalem to find that many of the Israelites had married pagans, something that had been forbidden by God (Deuteronomy 7:1-6), and urged them to make restitution (Ezra 9).

Finally, the people assembled before Ezra and confessed their sins. They agreed to put away their pagan wives and made a guilt offering to acknowledge their sin (Ezra 10).

Major Themes of the Book of Ezra

The major theme of the book of Ezra is obedience, and the obstacles faced by God’s people when they try to be obedient. In the first part of the book, the Israelites suffered persecution because they wanted to carry out God’s instructions.

There’s also a theme of God giving us the grace to obey Him. The second portion of Ezra shows how God provides His people with encouragement to obey Him.

Lastly, there’s a reminder that the more we study the Law of God, the more willing we are to obey Him.

Lessons from the Book of Ezra

There are many things we can learn from Ezra in the Bible. Here are four of the fundamental lessons I learned while studying the book of Ezra:

1. Obedience brings opposition. The children of Israel returned to Jerusalem to rebuild the temple of the Lord because He had given explicit instructions to Cyrus, king of Persia.

When they returned to Jerusalem, the people were eager to begin the work of the Lord, but they faced so much opposition, they stopped. They thought they had misunderstood what God said (Haggai 1:2).

3. Our loyalty should be to God over earthly powers. The people of Israel had to make a choice: would they obey the king’s command not to build the temple or obey God’s instructions to build it?

When given a choice between the two, our decision should always be to obey God rather than man (Acts 5:29).

4. The more we study, the more we’ll obey. This lesson becomes clear to us as we study the closing chapters of the book of Ezra. When Ezra went to Jerusalem, he taught the people about God’s Law. In response to what they had learned, the people separated themselves from the pagans among them (Ezra 7:25, Nehemiah 12:1, 13:1-3).

These lessons from the book of Ezra are ones we can implement in our own lives.

While Ezra is one of the smaller books in the Bible, it is chock-filled with lessons we can about obedience and what we can expect to face as God’s people. If you’d like to go do a deeper study of Ezra, The Book of Ezra Bible Study Workbook is a helpful tool to have you studying the Word of God. Get your copy on Amazon.

Have you ever read the book of Ezra? What were your takeaways? 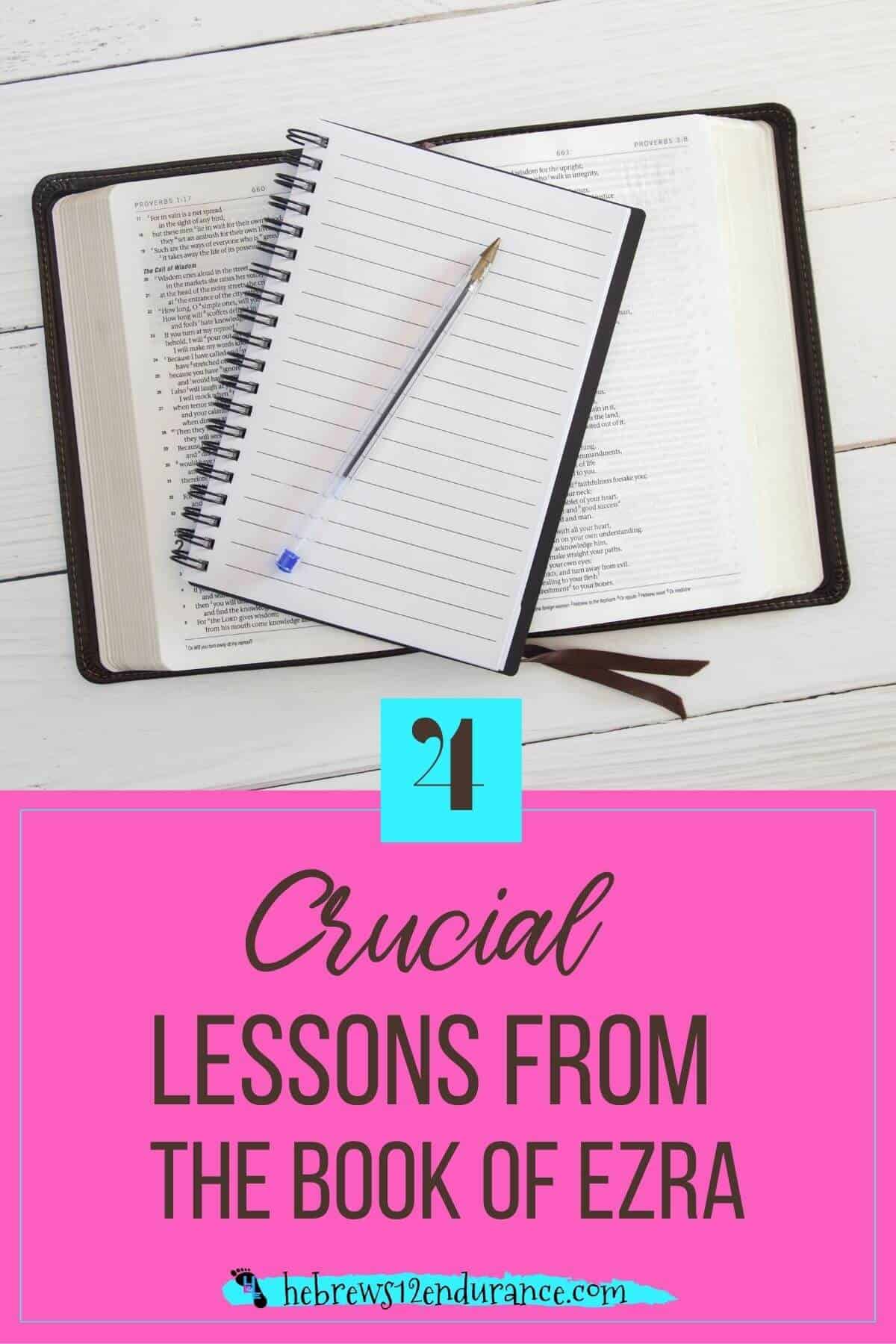