Biblical Sacrifice: What Does that Mean?

As Christians, we struggle with the concept of biblical sacrifice. We understand that Christ’s death on the cross was the ultimate sacrifice and that we ought to live our lives in a way that emulates his. But when it comes to actual sacrifice, we struggle with what it looks like or what it means for our lives.

The History of Biblical Sacrifice

As Christians, we know that the sacrificial system was introduced after sin. A perfect lamb–or another animal–was sacrificed in place of the person who was guilty. This mimicked the perfect sacrifice of Christ dying on behalf of humanity.

The first sacrifice happened off-page. When Adam and Eve sinned, one of the first things they did was try to make clothing for themselves.

Then the eyes of both of them were opened, and they realized they were naked; so they sewed fig leaves together and made coverings for themselves (Genesis 3:7 NIV).

But God knew they needed something better. He knew fig leaves would not cover them for any length of time, nor would it protect them from the elements of weather. But more importantly, he knew that because the wages of sin is death (Romans 6:23), something had to die in their place.

The Lord God made garments of skin for Adam and his wife and clothed them (Genesis 3:21 NIV).

While we don’t have the details of that inaugural sacrifice, I like to think God initiated it. I like to think he killed the first two animals and offered them as a sacrifice in place of Adam and Eve.

He did it because he wanted Adam and Eve to understand that while he was offering them grace by allowing them to live, something had to die because they had transgressed the law of God. They also had to be taught what to do because until that moment there was no need for anything to die.

There are many stories of sacrifice in the Bible, from the tale of Cain and Abel to that of Abraham and Isaac, to the ultimate sacrifice of an innocent Christ dying for all humanity. The sacrifice Christ made on our behalf is the reason we are allowed to live, and minister, and work. Maybe that’s why I picked up on the subtle theme of sacrifice in the book Collision of Lies.

The sacrifice Christ made on our behalf is the reason we are allowed to live, and minister, and work. #hebrews12endurance Click To Tweet

It’s because the idea of sacrifice is still an intrinsic part of our Christian lives. God wants us to be living sacrifices.

Therefore, I urge you, brothers and sisters, in view of God’s mercy, to offer your bodies as a living sacrifice, holy and pleasing to God—this is your true and proper worship (Romans 12:1 NIV).

Our lives matter to God and we should live as if they do. We should learn to put other people ahead of ourselves while keeping God at the first place in our lives.

The story started with an argument but what may have appeared as a domestic dispute was actually a symptom of something deeper, more sinister.

The story moved at a good pace and kept you engrossed in learning the details of the case. I did find that when the characters’ conversations were about anything other than the case, they were stilted and unrealistic. It was also difficult to see the lead detective Amara Alvarez as a fully rounded character as she didn’t seem to have a life outside of the cases she worked on. The author tried but I found his efforts stilted at best and forced at worse.

When the case started falling apart, I expected more explanations or at least a sense that things were being wrapped up. Instead, I was left with many unanswered questions that were not addressed in the epilogue.

The reason behind the lies seemed a bit too complex especially for an average reader to understand and was never fully explained. The reader is left with the theory that the police came up with and a brief “oh yes, that was it”, but it never provides the answer from the perspective of the perpetrators.

Know God: There were no faith elements in this book and only one mention of prayer and it was in a “let-this-work-out-okay” kind of way instead of an “I’m-believing-God-for-this-to-happen” way. Yet, upon finishing the book I realized that this was a book about sacrifice. There were several characters who sacrificed themselves for the greater good.

Know Yourself: When we first met Amara Alvarez, she was a Property Crimes detective who desperately wanted a transfer to the Homicide department. While we never really get the reason for her desire, we see her actively pursuing it by spending time with the Homicide detectives trying to learn more about the ins and outs of the division.

Like Amara, it’s important for us to know what we want and take active steps pursuing our dreams. Unlike Amara, we need to spend time in the Word and with God trying to figure out his plan and purpose for our lives.

It's important for us to spend time in the Word and with God trying to figure out his plan and purpose for our lives. #hebrews12endurance Click To Tweet

Run your race: What I liked about the character was her determination to walk the path set before her. Even when she knew things would get difficult she resolutely did the task at hand and did what she needed to do.

It was an intriguing story. What happens when everything you know about something is a lie? Do you continue to behave as if you hadn’t been given clues that what you believed was a lie? Or do you pursue the truth at whatever the cost?

Overall, I thought Collision of Lies was a good read and I would read other books from this author again. I received an advanced reader’s copy as part of the Revell Reads program; a positive review was not required.

About Collision of Lies 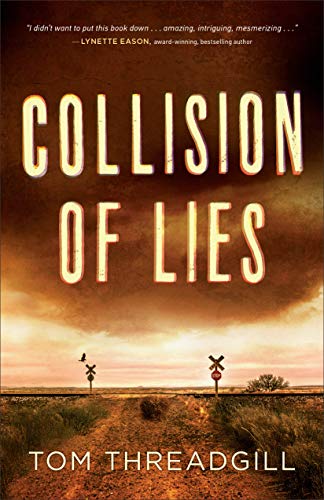 The case was tragic. But it was an accident. Right?

Three years ago, a collision between a fast-moving freight train and a school bus full of kids led to devastation and grief on an unimaginable scale. But a fresh clue leads San Antonio police detective Amara Alvarez to the unlikely conclusion that one of the children may still be alive. If she’s correct, everything law enforcement believes about the accident is a lie.

With time running out, Amara must convince others–and herself–that despite all evidence to the contrary, the boy is alive. And she will do everything in her power to bring him home.

A fresh voice in suspense, Tom Threadgill will have you questioning everything as you fly through the pages of this enthralling story. Purchase your copy of Collision of Lies on Amazon.

Tom Threadgill is a full-time author and a member of American Christian Fiction Writers (ACFW). He is currently on the suspense/thriller publishing board for LPC Books, a division of Iron Stream Media. He lives with his wife in rural Tennessee.