If you’ve been on this website for even a second, you would know I’m fascinated by the idea of endurance. Maybe you’ve asked questions like, What does it mean to endure? Why is endurance important?

Let’s examine what the Bible says about endurance to see what we can learn about perseverance. And then, I’ll share some Bible verses about endurance, that will hopefully, encourage your faith.

What Does the Bible Say About Endurance?

Most of us are familiar with the idea of endurance. We know that it involves getting through hard or unpleasant stuff and there’s usually a reward at the end.

When we hear the word endurance, most people think about rigorous exercises, like running a marathon or a triathlon.

And maybe that’s you, and right now you’re wondering what on earth does remaining faithful to God have to do with running a marathon?

I’d love to tell you the two have nothing in common but I can’t. The apostle Paul compared the walk of faith to a race.

Do you not know that those who run in a race all run, but one receives the prize? Run in such a way that you may obtain it (1 Corinthians 9:24 NKJV).

At the end of his life, he wrote,
I have fought the good fight, I have finished the race, I have kept the faith (2 Timothy 4:7 ESV).

Because you see, here’s the thing, if at any time in your faith walk you start thinking it’s easy, you become vulnerable to an attack.

The Bible tells us that the devil prowls around like a roaring lion seeking whom he can devour (1 Peter 5:8).
If a lion is on the prowl and wants nothing more than to eat you, should you be walking around as if you’re taking a stroll on the beach?

I don’t think so, I’d be running toward the finish line as if my name was Bolt. But when the Bible talks about endurance, it’s not talking about speed. Because living as a Christian cannot be compared to a sprint. It’s a marathon. One of those long ones that take days (or in our case, years) to complete.

What does endure mean in the Bible?

Let’s zoom in a little on the biblical meaning of endure.

As you can see, it was about remaining steadfast. Now if you’ve been a Christian for more than a second, you know how important it is to remain steadfast.

There are so many things that can distract you or throw you off course. There are things, and people in the church that will make you wonder if you’re saved, or if they are.

You’ll experience challenges that may you wonder if what you’re going through is worth it. If that’s you right now, let me take a moment to say, yes, my friend, it is worth it.

Because all of us are sinners and we deserve to lose our lives for it. But Jesus up heaven and all its splendors so He could pay the price on our behalf. He died so we don’t have to.

And while our lives here on earth may come to an end, death is not the end of the story. If we remain steadfast to the end, then we have the hope of heaven and a restored earth. We’ll get to meet Jesus face to face and that will make everything worth it.

Examples of Endurance in the Bible

One of the best examples of endurance in the Bible is the story of Jesus. Just think about it:

If that’s not a litany of hardship I don’t know what is. And here’s the worse part: He did nothing to deserve the kind of treatment He received while He was on earth.

Yet, Jesus did not call on the hosts of angels that were at His disposal. He leaned into His relationship with His Heavenly Father and chose to endure until the end.

My friend, the same type of endurance is required for us if we’re going to attain the crown of life that Christ has promised.

The apostle Paul tells us the key to endurance:
Rejoice in hope, be patient in tribulation, be constant in prayer. Romans 12:12 ESV

As you go forth in your Christian life, I’d like to share with you xx Bible verses about endurance. My hope is that you will read them, study them, and commit them to memory. And that yes, they will give you the fortitude to endure to the end.

For you have need of endurance, so that when you have done the will of God you may receive what is promised. Hebrews 10:36 ESV

Count it all joy, my brothers, when you meet trials of various kinds, for you know that the testing of your faith produces steadfastness. And let steadfastness have its full effect, that you may be perfect and complete, lacking in nothing. James 1:2-4 ESV

Blessed is the man who remains steadfast under trial, for when he has stood the test he will receive the crown of life, which God has promised to those who love him. James 1:12 ESV

Do you not know that in a race all the runners run, but only one receives the prize? So run that you may obtain it. 1 Corinthians 9:24 ESV

Not only that, but we rejoice in our sufferings, knowing that suffering produces endurance, and endurance produces character, and character produces hope, and hope does not put us to shame, because God’s love has been poured into our hearts through the Holy Spirit who has been given to us. Romans 5:3-5 ESV

Therefore, since we are surrounded by so great a cloud of witnesses, let us also lay aside every weight, and sin which clings so closely, and let us run with endurance the race that is set before us, looking to Jesus, the founder and perfecter of our faith, who for the joy that was set before him endured the cross, despising the shame, and is seated at the right hand of the throne of God. Consider him who endured from sinners such hostility against himself, so that you may not grow weary or fainthearted. Hebrews 12:1-3 ESV

May the God of endurance and encouragement grant you to live in such harmony with one another, in accord with Christ Jesus, Romans 15:5 ESV

It is for discipline that you have to endure. God is treating you as sons. For what son is there whom his father does not discipline? – Hebrews 12:7 ESV

No temptation has overtaken you that is not common to man. God is faithful, and he will not let you be tempted beyond your ability, but with the temptation he will also provide the way of escape, that you may be able to endure it. – 1 Corinthians 10:13 ESV

More than that, we rejoice in our sufferings, knowing that suffering produces endurance, and endurance produces character, and character produces hope – Romans 5:3-4 ESV

And let us not grow weary of doing good, for in due season we will reap, if we do not give up. – Galatians 6:9 ESV

As Christians, perseverance is a skill that we need to sharpen and practice often. It is the man (or woman) who remains steadfast to the end who will receive the reward that Christ has for them. Remain faithful, my friend, you can do it through the power of the Holy Ghost. I pray that these scriptures on endurance have encouraged you.

What was your favorite Bible verse on endurance? verse? Share it with me in the comments. 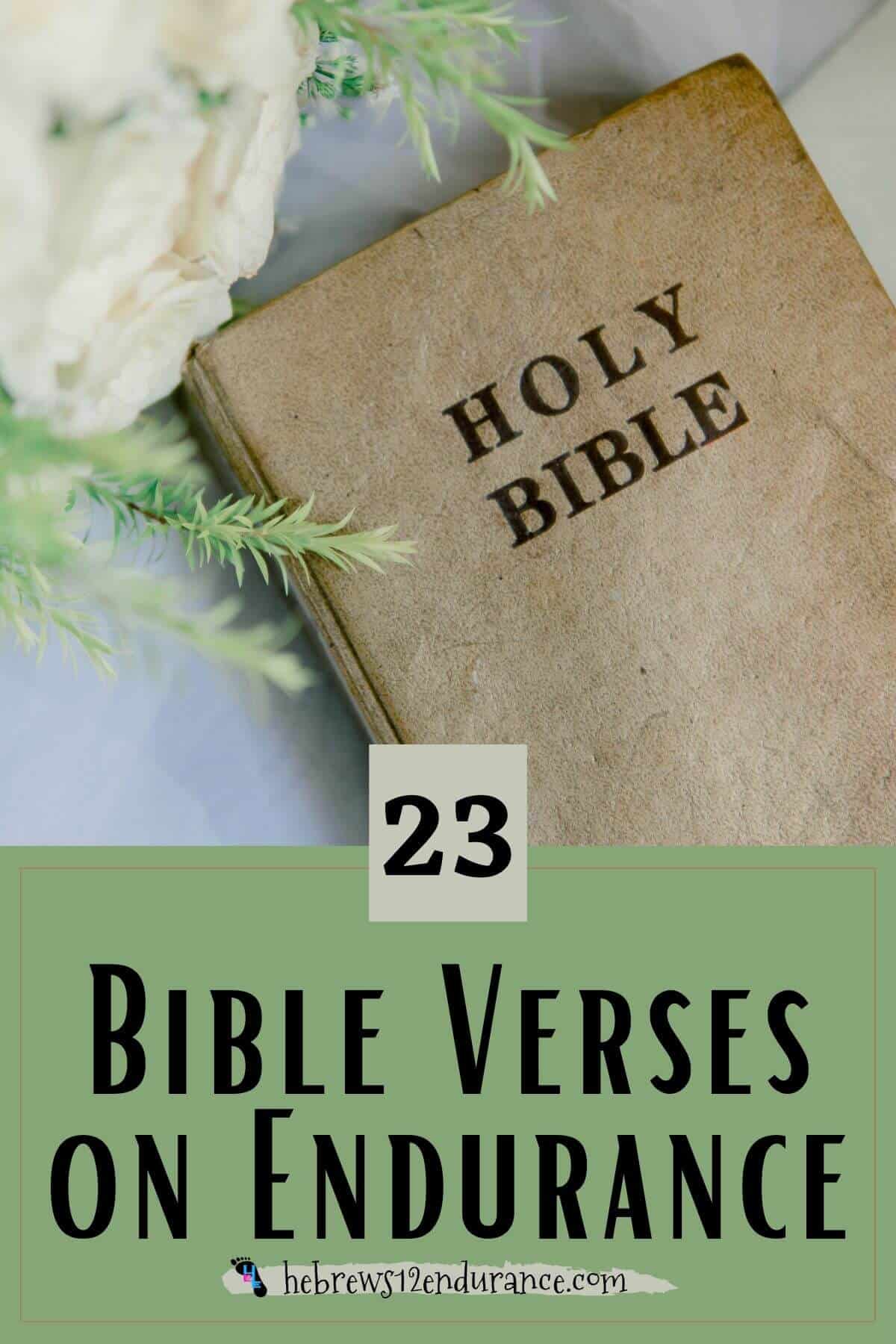