Sometimes we take it for granted. We assume that because we’re Christians, God’s forgiveness is automatic. It’s not though and sometimes we need to remind ourselves that it’s important for us to seek it.

Why We Need Forgiveness

Humanity was created perfect and without sin. God gave mankind one rule which they unfortunately broke and sin entered the world. Sin puts a barrier between us and God one we cannot cross on our own.

Forgiveness lowers the wall between us and God and allows us to stand in His presence once again. It restores our ability to commune with Him. We need God’s forgiveness to restore our relationship with God. Without it we are cut off from Him, unable to go into His presence.

How to Receive Forgiveness from God

In order for us to receive God’s forgiveness, we have to ask for it. The Bible tells us that if we confess our sins God is just and will forgive us and cleanse us from all unrighteousness (1 John 1:9). Before we can be forgiven, we have to accept that we have done something wrong. And then, we have to confess whatever wrong we have done.

When we do this with a contrite heart and humble spirit God forgives us and removes every trace of unrighteousness from us. He imbues us with the righteousness of His Son Jesus and labels us holy.

Forgiveness is a gift from God. It is not our right or something we’re due. It’s a gift—given to us because He loves us and not because we deserve it.

How God’s Forgiveness Benefits Us

1. God’s forgiveness allows us to forgive others. Let’s face it: forgiveness is hard…especially when the person who hurts us refuses to acknowledge what they have done or apologize. Our inability to forgive becomes even more difficult if they continue to hurt us or cause us pain.

Yet, if we are able to remember that God forgives us even though we don’t deserve it, we can try to apply that same grace to people who hurt us or let us down.

2. Accepting God’s forgiveness allows us to forgive ourselves. Sometimes the vilest sinner we know looks at us in the mirror. We remember all the sins and evil deeds we have done and we think God can’t forgive us. Somehow we put a limit on the level of sin that God is able to forgive. Thank God He doesn’t accept our puny limits.

Our sins may be the vilest crimes ever contemplated in human imaginations, but God’s grace and forgiveness are enough to make them as white as snow—newly fallen snow–unmarred by any tint or film or dirt–snow so white it hurts the eyes to look at.

Our sins may be the vilest crimes ever contemplated in human imaginations, but God’s grace and forgiveness are enough to make them as white as snow—newly fallen snow. #godsforgiveness #hebrews12endurance Click To Tweet

3. God’s forgiveness allows us to live free. Living with the guilt and shame of sin committed carries a burden that is felt in every area of life.

We are unable to truly live because we are not free—we are caught in the shackles of sin. When we live outside of God’s forgiveness, the enemy attacks us with great ferocity because he wants us to feel defeated. He wants us to believe that God can’t forgive us because our sins are too dark.

But when we repent, confess our sins, and accept God’s forgiveness, a weight is lifted off our shoulders and we’re able to experience the peace Jesus promised.

Peace I leave with you, My peace I give to you; not as the world gives do I give to you. Let not your heart be troubled, neither let it be afraid (John 14:27 NKJV).

We become new creatures as we learn to bask in God’s forgiveness and grace.

We become new creatures as we learn to bask in God’s forgiveness and grace. #godsforgiveness #hebrews12endurance Click To Tweet 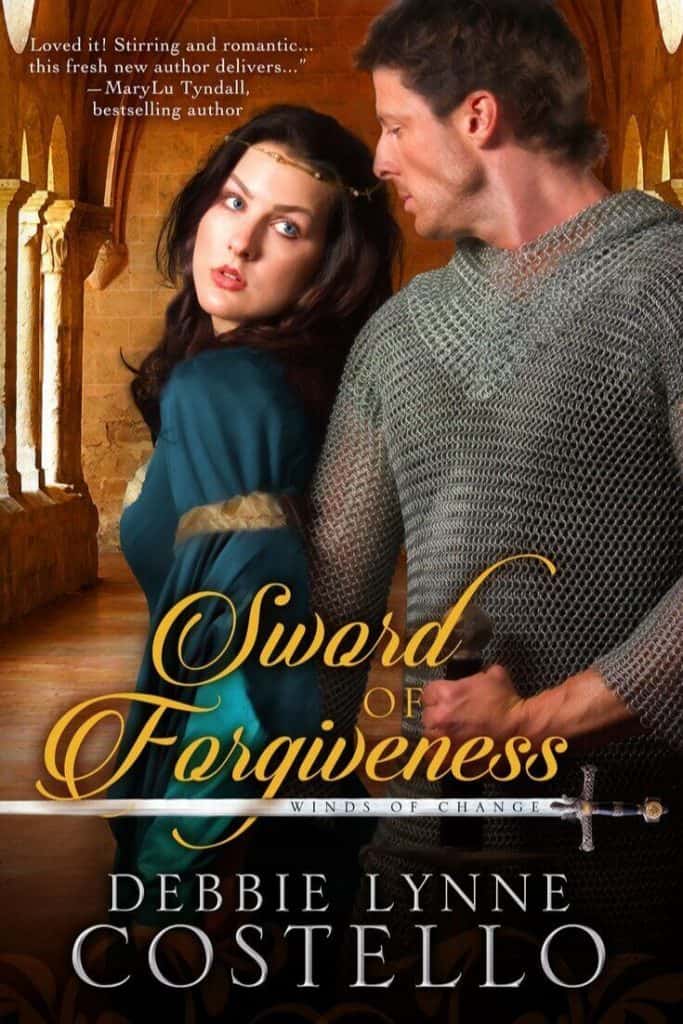 The characters in Sword of Forgiveness had to learn the lesson to forgive as God forgives. They had to learn to extend grace to others and to themselves.

Sword of Forgiveness tells the story of Brithwin who was forced to marry Royce by the king’s decree. Brithwin has lived a hard life despite being the daughter of a wealthy landowner as her father was unbelievably cruel to her.

Know God: The theme of forgiveness is deeply woven into the story. Both characters had to learn that God forgives—but they had to humble themselves enough to ask for it.

Both Brithwin and Royce found it difficult to believe that God would be able to forgive them for what they perceived as their great sin.

Thankfully, both characters were able to learn that God’s character is not like ours. He is faithful and will forgive us for our sins if we will confess them to him.

Know yourself: Brithwin and Royce referred to themselves as honorable people and for the most part, they were.

They knew their boundaries and what they would and would not do yet there were times when they did not act on their word though they said they would.

It’s human for us to err and act in ways contrary to what we believe about ourselves. It’s therefore important to spend time in self-reflection so we can know when we acting out of character.

Run your race: The characters in Sword of Forgiveness had a lot to handle and there were multiple things happening at once. Each of us will have our cross to bear—and we’ll have to do it while we’re interacting with others.

Sword of Forgiveness was an interesting read but there were times when I was taken out of the story because things didn’t flow as well as they could have. I hate putting spoilers in my review but feel as though you won’t be able to understand what I’m saying without more details so here goes…

One minute Brithwin was being held in the dungeon against her will and her friends were risking their lives for her. The next day—hours after her rescue—she is off to pray with the priest and wants to eat in the great hall when nothing had been resolved.

It was as though one day the castle was in the middle of a big intrigue, there was a scuffle and then, everything went back to normal.

There were other things that were jarring—like the way Royce claimed to be a good judge of character yet he misjudged everybody. I also did not like the way the enemy was dispatched. It was a little bit too easy—especially since it happened three times in the book.

Sword of Forgiveness had strong biblical themes which I enjoyed. I liked the way God spoke to the characters and they were comforted—much as we are in real life.

God forgives sin but we also need to learn to accept His forgiveness and learn to forgive ourselves. #booktruth #swordofforgiveness #hebrews12endurance Click To Tweet

About Sword of Forgiveness

After the death of her cruel father, Brithwin is determined never again to live under the harsh rule of any man. Independent and resourceful, she longs to be left alone to manage her father’s estate. But she soon discovers a woman has few choices when the king decrees she is to marry Royce, the Lord of Rosen Craig.

As if the unwelcome marriage isn’t enough, her new husband accuses her of murdering his family, and she is faced with a challenge of either proving her innocence or facing possible execution.

Royce of Hawkwood returns home after setting down a rebellion to find his family brutally murdered. When all fingers point to his betrothed and attempts are made on his life, Royce must wade through murky waters to uncover the truth. Yet Brithwin’s wise and kind nature begins to break down the walls of his heart, and he soon finds himself in a race to discover who is behind the evil plot before Brithwin is the next victim.

Debbie Lynne Costello is the author of Sword of Forgiveness, Amazon’s #1 seller for Historical Christian Romance. She has enjoyed writing stories since she was eight years old. She raised her family and then embarked on her own career of writing the stories that had been begging to be told. She and her husband have four children and live in upstate South Carolina with their 5 horses, 3 dogs, a cat, and a miniature donkey.