Body shaming. It’s what we do when we make people conscious about their weight or the way their body looks. Most times, body shamers make no attempt to understand the reason a person looks the way they do. And they certainly don’t think about how the other person feels when they start to tear them down with words.

Yet it has become a very popular part of our culture to the point where we’re body shaming on social media and in the media. 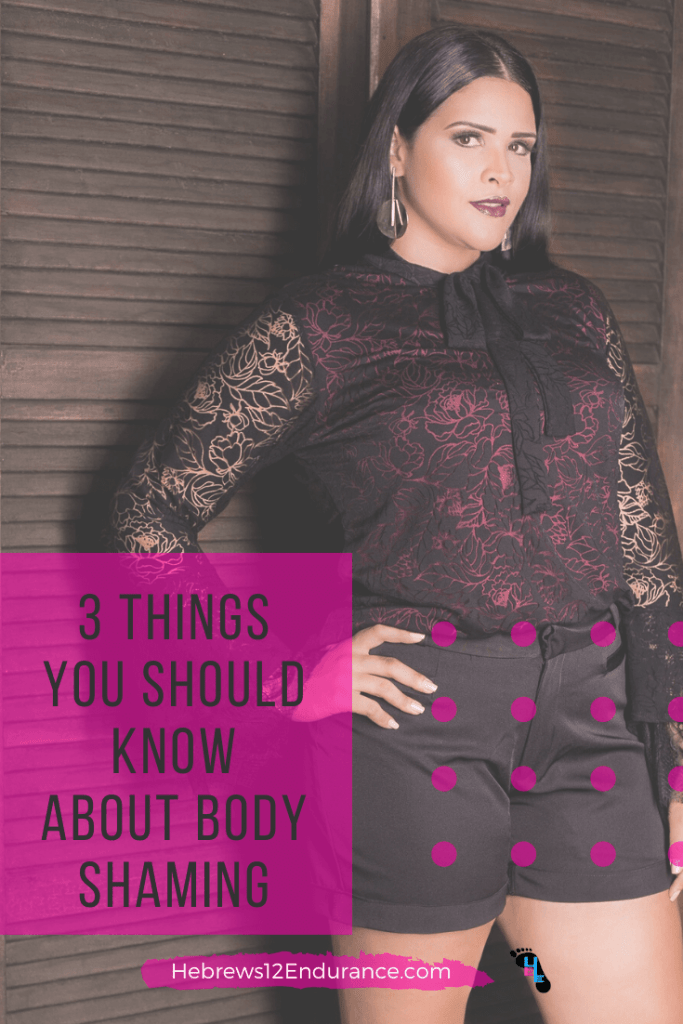 My Experience With Body Shaming

I was always the “fat girl”. The chubby child. The one who was bigger than everyone. This was long before “fluffy” became an accepted label. “You’re so broad,” they would tell me. “Your hips are so big.”

These words were not being said to complement my shapeliness, no, they were said to highlight how different I was from everyone else. I heard the words that weren’t said. “Why aren’t you thin … like her?”

Pretty soon, the words started coming out of my mouth. “I’m so fat.” “My thighs are so big.” “I wish I were thinner.” I started body shaming myself.

It got so bad, my husband noticed and commented on it. “Why do you do that?” My husband asked, “It’s like you’re trying to put yourself down before anyone else gets a chance to do it.”

Exactly. I wanted to beat everyone to it: before they could call me names or assign a size to me, I did it myself. Because if I’m already fat-shaming then you won’t have a reason to.

Only, it does something to you. When the shaming words are outside of yourself you can fight them off. You can ignore them. You can say they aren’t true. But when the words get inside...

I completely empathized with Fat Amy from Pitch Perfect. I got why she called herself fat even before the explanation was given. Why do we body shame? How do we break the cycle?

When the shaming words are outside of yourself you can fight them off. You can ignore them. You can say they aren’t true. But when the words get inside…

I completely empathized with Fat Amy from Pitch Perfect. I got why she called herself fat even before the explanation was given. Why do we body shame? How do we break the cycle?

What is Body Shaming?

But it goes a lot deeper than that.

1. Body shaming often stems from a person’s negative view about themselves.

Yourdictionary.com defines body shaming as the practice of making critical, potentially humiliating comments about a person’s body size or weight.

I’m not going to pretend to be an expert. I’m just coming at you from my own personal experiences. I think body-shaming stems from a person’s own insecurities. This is true whether it is directed inwardly or outwards. We criticize that which is different or what we don’t understand.

I remember a few years ago I had put on a little weight, ironically I had noticed it but for the first time in my life, I wasn’t letting it freak me out. I was actually enjoying it. A co-worker came up to me and said, “Yuh nuh see say yuh put on weight? Yuh de get fat.” (Don’t you realize you’ve put on weight? You’re getting fat.)

The first time she said it I did not respond. I internalized it and used it as my own personal flagellation stick. The next time she saw me, she made the same comments. I mentioned it to my husband who was my boyfriend at the time and he said I should say it back to her.

“Just try it.” He said. “Misery loves company and she’s just miserable so she’s trying to make you feel the same.”

I would eventually see this young lady again and just like previous times, she made the comment that I was getting fat.

“You too,” I replied. Yes, I did the mean thing and turned it back at her.

“Nuh true. (That’s true).” She responded and started looking down at herself. After that day, she never made those comments to me again.

My husband was right. She had been trying to make me unhappy about my weight because she was unhappy about hers. The interesting thing was, she was actually the heavier of the two of us.

Do you body shame? The way you talk about yourself and others makes a difference. #hebrews12endurance #loveyourself Click To Tweet

2. Body shaming is deeper than making jokes at the “fat girl.”

Now I know the belief is typically that only “fat girls” experience body shaming, but anyone who is criticized because of their body type is a victim of body shaming.

So, talking about that thin girl in a disparaging way? That’s body shaming. In fact, I’m going to take it one step further and say any negative comment about a person’s physical features is an act of body shaming.

Why should someone be made to feel uncomfortable because of the way their ears are shaped or the texture of their hair, the color of their skin or their weight?

Why should you be made to feel uncomfortable in the skin that you’re in? God made all of us in His image.

Did He make some of us taller?

Did He make us with different eye colors?

3. The only way to deal with body-shaming is to face the underlying issue.

Before you start teaching the next generation to body shame (yes, it’s a trait we pass on). Try to figure out why you are uncomfortable with your body.

Did your mother repeatedly make negative remarks about your weight when you were growing up?

Did you feed yourself on a constant diet of media images that talked about the “ideal” body type?

It may not be possible to find out why the person who made you self-conscious about your body did or said what they did. What you can do is analyze your response to it.

Why did you react to it the way you did? Why did you decide to internalize their words? What are you going to do about it?

How to Deal With Body Shaming

I wish I could tell you about the Bible verse that says, “And God said, ‘Thou shalt love the skin you’re in with all your heart.’” Unfortunately, there’s no such verse. Maybe the girls in Bible times didn’t body shame.

Maybe they had such good self-esteem that there was no need to write down any references that we modern-day girl can use.  What we can think about instead are the things that are written in the Bible:

We are made in the image of God (Genesis 1:26). I don’t want you thinking that the pre-fall girl was made in God’s image but the rest of us were made by another standard. If that were the case, the Bible would only have two chapters which would be such a welcome fact for those of us who struggle to read the Bible but not such good news in other areas of our lives.

Before He formed us in our mother’s womb, God knew us (Jeremiah 1:5). The beautiful thing about God is that He’s able to see everything. He can look through time and see you sitting at the computer with that cup in your hand. Or you, reading this post on your phone on your way to work. Had He not wanted us to be here, we wouldn’t be here, simple as that?

God loves treats us as if we were his own eyes (Deuteronomy 32:10). Long before it became a big deal on the internet, women have been dealing with the way they think about their bodies. Long after its popularity fades away, we will continue to have to deal with issues with body image. So how do we get the next generation of girls to love the skin they’re in?

It starts with us. The way we see ourselves will transmit to the generation that’s coming up.  When they see us loving ourselves–no matter what we look like–they will realize that they are lovable too.

An Activity to Put Body-Shaming Behind Us

I read Enough by Sharon Jaynes and she suggested that when we’re trying to determine if something came from the enemy or not, we should add the phrase “in Jesus’ name” after it.

Once you go through everything on the “I don’t like” side with the “in Jesus’ name” amendment, strike each line out and replace it with something God would say to the daughter He loves more than anything else.

Let’s try one together: “My face is fat in Jesus’ name.” does that sound like something your heavenly father would say to you?

Let’s strike that out and say instead: “I have really defined cheekbones in Jesus’ name.”

Isn’t that a much better statement? We have to practice speaking positive things about our bodies. When we do that, we let others know that we will not accept negative comments about ourselves.

2 thoughts on “3 Things You Should Know About Body Shaming”